Something is rotten in the state of Parsippany 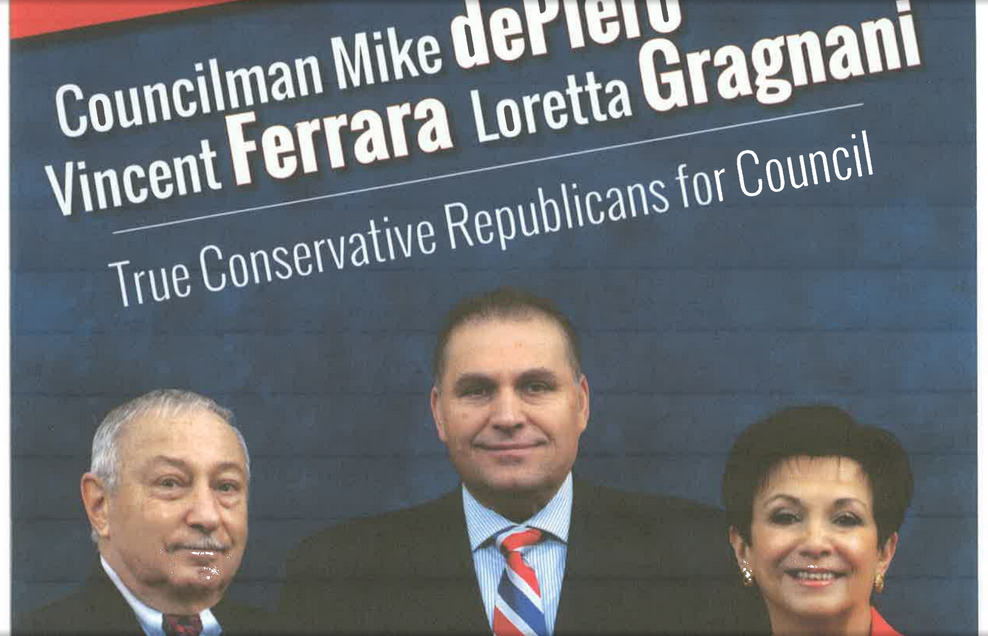 Super PAC spending is no longer unusual in New Jersey politics, Save Jerseyans.

What’s a little strange? To see a Democrat Super PAC with national ties wade into a GOP municipal primary in a Republican-dominated town. But that’s exactly what’s happened with the mailer pictured on your right below. And it sounds like more is coming.

A Republican internal struggle between two factions and control of millions of dollars in public contracts forms the backdrop of this story.

The mailer itself, supporting dePiero’s faction, was paid for by Future First which, by the way, is presently unlisted on the FEC website but it shares an address with the D.C. firm “Next Level Partners;” Jennifer May of Next Level Partners is the PAC’s treasurer and, in a past life, she served as a fundraiser for the late John Adler (D, NJ-03). One of her firm’s primary clients is Priorities USA Action, described by the NYT as a “huge” pro-Clinton super PAC.

There’s more. According to disclosure forms available at the IRS’s website, the PAC’s directors Jennifer May and Robert Dombrowski, an Essex County Democrat committeeman.

It’s not just mail, either. America’s Future First, its “connected” entity according to the same IRS Form 8871, is actively Parsippany-based recruiting political campaign workers via ZipRecruiter.com.

Thus far, dePierro and his running mates have adamently declined any connection to the pieces but they’re also declining to criticize the expenditures; dePierro recently told the Daily Record “I just hope if they send out any more fliers, they spell my name right.” Fair enough…

Their opponents aren’t sold. “Why does a liberal Washington, DC Super PAC and its contributors even care about Parsippany? What’s in it for them? Who brought them here?” asked Visakay. “Aside from Councilman dePierro explaining his ties to this PAC, we are demanding that the PAC itself provide full disclosure of its donors so that Parsippany taxpayers can get a full picture of who is funding this PAC and why they have interest in Parsippany? It’s time to follow the money and find out where it leads.”

Influential Morris GOP Chairman John Sette has yet to weigh in.

What I’ll say: something is rotten in Parsippany, Save Jerseyans. Duh! Right? And since we all know that Super PACs are increasingly being used as a way to get around pay-to-play laws, at the state and federal levels, Republicans bear a responsibility to the public to uphold Republican principles and avoid letting a council race devolve into a pissing match (pardon my French) over one of Morris County’s biggest ATM’s.

That kind of politics is everything that’s wrong with the Garden State. Consequently, GOP’ers need to do everything possible to keep it out of their own internal politics or we’re no better than the bad guys, right?

In this case, I can’t think of a likely ideological or strategic motive for a Democrat Super PAC to intervene here, backing one slate of Republicans over another in a town that Chris Christie carried with better than 2/3 of the vote in 2013, that doesn’t involve someone with a pecuniary interest… can you?

Let’s hope we find out sooner rather than later.

3 thoughts on “Something is rotten in the state of Parsippany”