“Not in this room” 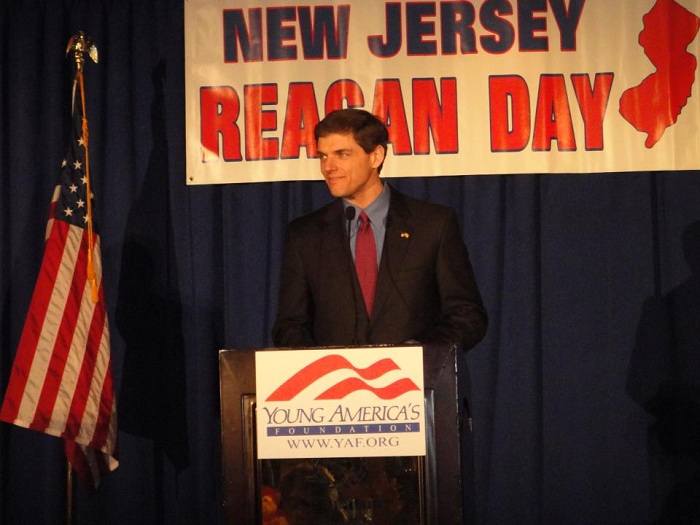 “In terms of what my legacy is, you’ll probably get some mixed views depending on who you’re talking to,” the Vice President conceded.

“Not in this room,” the Assemblyman shot back with the 1,000+ strong crowd’s approval:

Reagan and his contemporaries dominated the show but Webber’s performance holds the most interest for New Jersey political prognosticators like yours truly.

We spoke with Asm. Webber about the run-up to his annual event back on March 9th, Save Jerseyans, discussing both how it’s grown since the first one over a full decade ago and, of course, what the future might hold for the Reagan-esque legislator who retains considerable clout among active conservative NJ GOP’ers. You’d think the sky is the limit based on last night’s turnout.

Everyone in the NJ GOP hierarchy from TK2 (Tom Kean Jr.) to the LG (Kim Guadagno) was on hand. Notably absent? The Governor, unsurprisingly, who frequents few state-based Republican events in recent years but also Assembly Minority Leader Jon Bramnick who is widely considered a leading contender for the gubernatorial nomination in 2017. Webber had missed his big 1,000-ish attendee event in A.C. earlier this year.

Can we read anything into it?

Kind of, without getting bogged down in the weeds of super inside baseball stuff…

For starters, Webber needs to be considered viable and very much competitive in any statewide GOP primary in 2017 and 2018 just the same as Kean, Guadagno, and Bramnick. That’s not news. No one doubts that he’s got the talent and brand to give it a go. What he’s demonstrated as of late, years after an unceremonious end to his tenure as Governor Christie’s first NJ GOP chairman, is an ability to forge a network extending both inside (e.g. Reagan Day’s door buster) and outside (e.g. the Cheney get and his Reagan Ranch trusteeship) of the Garden State Republican establishment. It’s a promising start for a 43-year old.

Secondly, it’s increasingly clear that the Governor is not firmly in the driver’s seat at the moment. Partly because he’s focused elsewhere, but also owing to his diminished capital. Don’t underestimate him: he’s still the state’s most formidable GOP power broker, and even in a weakened condition after almost 1 1/2 years of scandals, bad polls, and worse breaks, few committee or elected-level Republicans will share a cross word about him on the record. But being the top dog isn’t the same as being the ONLY dog which he was from the end of his Attorney General tenure in late 2008 up until Bridgegate unsettled his waters. Answer honestly: who’s endorsement would matter more in 2013? Tom Kean Sr.? Or Chris Christie? Again, the fact that it’s even a question – compounded by the reality of these men possibly having different answers – is a politically significant development. The horse is out of the barn.

Which brings us to our third and final point: there’s growing potential for a real NJ GOP gubernatorial primary in 2017. And that’s a good thing! It’s been awhile, but as Bret Schundler proved in the relatively recent past, the NJ GOP base isn’t adverse to surprising the establishment with an outside selection, and regardless of the ultimate outcome, robust primaries can help parties grow. The brightness, gravity, and chosen trajectory of Chris Christie’s star has had the unfortunate effect of stunting the state party’s developmental orbit as of late. So in my mind, Save Jerseyans, any contest that builds the leadership bench and calls current promising prospects up to the bat is a net positive. Open the windows and let some fresh air in! Bramnick and Webber are making noise and mustering support. The LG is building a campaign organization of her own behind the scenes. And admittedly I’m stoked about it.

Is any active N.J. Republican not interpreting item #3 as a hopeful development?

Not in that room last night…