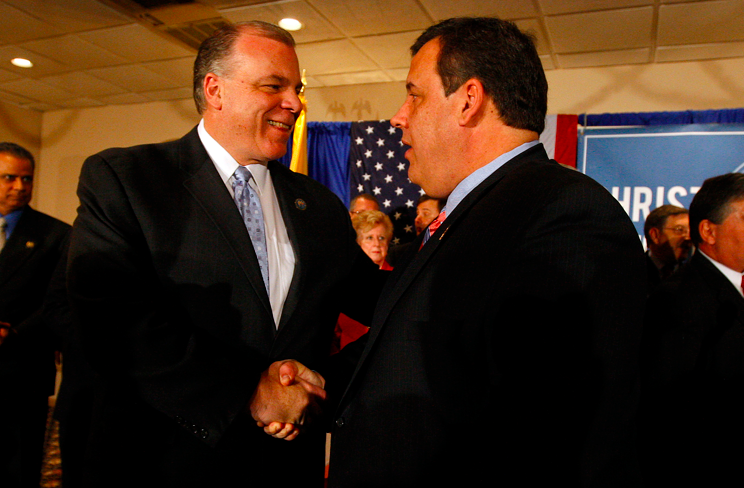 Your tax dollars at work.

Many a decent idea has been railroaded by Garden State government and they’ve brought many a bad idea back from the dead. Here’s your collection for the week of July 27th, 2015:

You have to hand it to Senate President Stephen Sweeney (D-Gloucester): he tries. In a bold, new plan announced this week, Sweeney spells out how he wants the federal government to help bailout our state’s unfunded liabilities and solve our public employee pension woes.

Using “Government Motors” as an example, he said “If it’s in the nation’s interest for the federal government to step in and keep Wall Street and General Motors afloat, it should be able to find ways to protect the pensions of middle-class teachers, police and government employees.”

Yes, Senator, your friends do deserve to have the federal government repeat its foolish economic intervention mistakes so that nothing has to change for public employees. I forgot they were a protected class.

Christie’s office, for its part, not so much poked as pointed to the gaping, Swiss Cheese-like holes that led to our current predicament and in Sweeney’s new plan.

“The simple fact is that we have a system where an NJEA member retiring in just a few years contributes just $126,000 to their pension and health benefit costs over 30 years and takes out $2.4 million in benefits. The math does not work at all. That is the fundamental problem that needs to be solved,” said Nicole Sizemore, Christie’s deputy press secretary.

Go easy on Sweeney. Math isn’t his strong suit and as he’ll be the first to tell you, he didn’t go to college.

It’s been a rough year for police officers. It seems like every time there’s any kind of entanglement between a caucasian officer and a person of color that goes tragically, horribly awry, it becomes network news and it’s open season on the cops everywhere from legacy to social media.

While that backlash and vitriol is almost always completely unmerited, it’s not like these folks don’t make their share of human errors. Take this situation in Morris County, where the corrections officers in the county jail were the beneficiaries of an alleged software “glitch” that “… inflated the overtime for 19 of the 143 corrections officers who worked at the county jail in 2014 — doubling most and tripling a few.”

“I’m just baffled,” said Leon Pollison, president of PBA Unit 298, which represents the corrections officers. “I’m so upset with what happened. I’m very disappointed that the county would give false numbers without checking.”

For what it’s worth, I’m not sure how “baffled” or “disappointed” one particular corrections officer is right now since he got $99,710.76 from this mistake — though I’m not privy to whether or not he and the others are being or would be made to return those excess earnings? If you have the answer, let me know via the email below. “

All kidding aside, though, it’s probably in goofy places like this that Sweeney ought to be checking for extra cash to make debt payments. With that being said, however, wouldn’t those outsized payments make a great object lesson for kids, in explaining the “perks” of doing the right thing?

What is Chris Christie doing? Polling where he is in a national presidential contest, who is advising him during a Republican primary to (literally) hop on board with liberals and attach himself to one of their most durable dumb ideas?

I’m not a conspiracy theorist, here to tell you that the climate change and rail agenda is a clever plan of the Left to keep us all in small, localized sectors they can control – I’ll leave that up to you all to decide for yourselves.

What I will tell you, though, is that high speed rail projects are costly, slow, and haven’t been overwhelmingly successful in the places they’ve been rolled out on grander scales than even this proposed one.

Maybe it really is all about control?

Got more Bad Business tips? Send them my way: tamerabourasmusic@gmail.com or on Twitter, @iamtamerabouras.