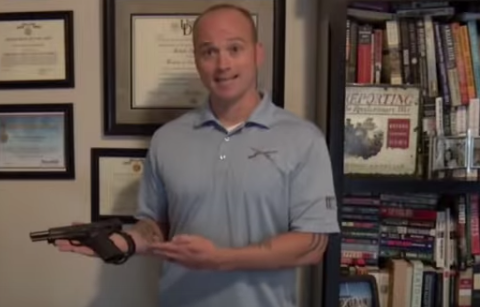 Governor Chris Christie’s gun record would be getting more scrutiny if he was polling better in the early states, Save Jerseyans, but if he wants to get some serious attention and punch up his support among conservatives, he now has yet another opportunity to advance the cause right here in New Jersey.

The terminology is important.

“Shall Issue” states mandate that issuing authorities SHALL grant permits provided the applicant meets basic requirements. “May Issue” states like New Jersey, however, allow local authorities to deny carry permits even if the applicant meets basic requirements. Our state demands that applicants demonstrate justifiable need, or “specific threats or previous attacks demonstrating a special danger to applicant’s life that cannot be avoided by other means.” Here, the Newton Police and Sussex County Prosecutor’s Office didn’t believe Mr. Tumminelli demonstrated the Administrative Code standard of “justifiable need” to carry – despite the fact that he’s a DOD official who works with counterterrorism task forces combating ISIS – so he wasn’t granted a permit carry.

I hope we can agree that THAT is more than a little absurd?

This is where Chris Christie comes in.

He’s right when he says that he can’t unilaterally make New Jersey a “shall issue” state overnight without the legislature. He CAN direct the Attorney General to expand justifiable need. When he signed Executive Order No. 180 back in June, establishing the New Jersey Firearm Purchase and Permitting Study Commission tasked with reviewing New Jersey’s gun regulations, the Governor simultaneously expanded the definition of justifiable need to include domestic violence victims.

There’s no reason he can’t expand it again to help Michael Tumminelli. It’s the right thing to do and, happily, it’s also politically advantageous. Nice when it works out that way!