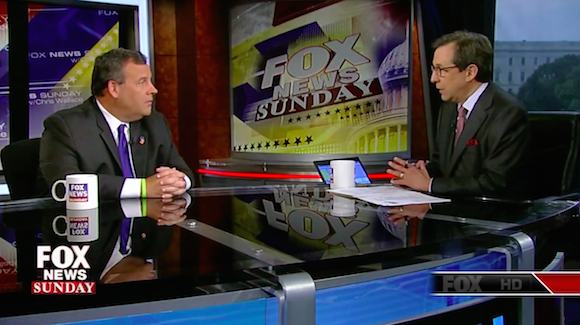 He’s fighting like there’s no tomorrow, Save Jerseyans, and the polling invites it…

From the 8/30 edition of Fox News Sunday:

WALLACE: That you’re entitled too.

CHRIS CHRISTIE: Thank you very much, your highness. We appreciate it. This is not royalty in the United States. You have to battle, fight, and answer questions by the American to become President of the United States. It’s not a familial ascendency.

WALLACE:  Two points however, first, because you’ve had your own problems during the height of the Bridgegate scandal  it turns out that you and one of your top aids were texting each other, and it turned out that 12 of those texts were deleted, and also when you turned over your e-mails to the state legislature, the only e-mails that you turned over were from your, your private Yahoo account. And as in the federal government, the state government in New Jersey says if you’re conducting government business, it should be on a government e-mail account.

CHRIS CHRISTIE: Ya my government business was conducted on a government account. And the one e-mail you’re referring to and the only one they’ve released, involved a press release. So, let’s all remain calm. My press secretary sent it to my private account, I’m sure  inadvertently and I responded. We cannot compare that, can we? To someone having a private server in the basement of their home where they did all of the government business on a private e-mail server in their basement? We can’t compare that to having national security — we’re really not, Chris, are we? To having national security and classified documents running through a server that’s not protected by the Federal Government that could be hacked by the Russians, Chinese, or a group of 18-year-old hackers who want to have fun? We’re really not comparing the fact that she’s wiped away tens of thousands of e-mails that had relevant information on them, because she just believed she’s entitled to do that. Let’s talk about lawlessness and openness. Everything I’ve done as Governor has been an open book and I’ve answered every question every question anybody has had to answer, can you hold Mrs. Clinton to that standard? I’ll tell you something, I haven’t seen it. The fact is the American people need to know they have a President who’s willing to be open and honest and direct. Mrs. Clinton is the opposite of those, 180 degrees opposite.

WALLACE: All right. Hillary Clinton went after Republicans again this week for what she calls so the-called war on women. Take a look.

HILLARY CLINTON (CLIP): Extreme views about women, we expect that from some of the terrorists groups, we expect that from people who don’t want to live in the modern world, but it’s a little hard to take coming from Republicans who want to be the President of the United States.

WALLACE: Now, she didn’t mention you by name, but you are one of the Republican Candidates who wants to defund and in fact in the state of New Jersey, you have defunded Planned Parenthood. What do you think of that comparison?

CHRIS CHRISTIE: Well there’s a uniter, isn’t. Comparing Republicans to terrorist groups. There’s a real uniter. That’s the woman you want sitting in the oval office to bring our country back together. That’s a disgrace and she’s a disgrace. The fact is this —

CHRIS CHRISTIE: She’s a disgrace for saying that. For comparing Republicans to terrorist groups, don’t let her go on that, Chris, that’s awful.

WALLACE: I wasn’t near Iowa at the time.

CHRIS CHRISTIE: That’s a disgrace, it is a disgrace. Can you imagine if we compared the Democratic party to terrorist groups? Can you imagine the outrage in the mainstream media for that? Yet, she stood up and said that Republicans are like terrorist groups. Well, here’s what I don’t think mainstream America’s for, I don’t think mainstream America is for an organization getting federal funding, who kills children in the womb, in a particular way, so that it maximizes the value of their body parts on the open market for sale for profit. Now if Mrs. Clinton thinks that’s what mainstream America likes, I’m happy to have the debate with her. But, of course, she won’t even answer those questions because she doesn’t even to want talk about what’s really going on at Planned Parenthood, she just wants to talk about the vague generalities about war on women. But I’m not going to be someone who is going to let her stand up and call my party terrorists. We’re not, and one other thing, I can’t wait, I can’t wait until next September to get on stage, with Hillary Clinton, as the Republican nominee, and the people in the audience know, there will be no one better to prosecute the case for an optimistic, hopeful, better America, and against a kind of garbage than I would be against Hillary Clinton.

CHRIS CHRISTIE: Here’s the difference between Washington, D.C. and being a Governor. I got done. I don’t have to argue about whether they should shut down the government or not, in New Jersey, six years ago, I defunded Planned Parenthood and I made it stick. We vetoed it eight different times in New Jersey, and we’ve made that veto stick each and every time, despite veto override attempts. That’s what an effective executive does and an effective leader does.

WALLACE: Ok, but here you have a Democratic executive who would veto if Congress were somehow to pass a budget that defunded Planned Parenthood.

CHRIS CHRISTIE: Well you know what, maybe we should test the president. Because in the end, we haven’t done anything yet in Congress to test him. I think we should be passing tax reform and putting it on his desk. I think we should be passing repeal and replacement of Obamacare and putting it on his desk. Let the United States people see, let us see, who the real obstructionist is in Washington, D.C. We elected a Republican Senate and a Republican House to get things done. Let them put those things on the president’s desk and let the president show the American people that he doesn’t want to run the government. See, I think Republicans to want run the government, and in New Jersey, we have not had one government shutdown in six years, despite having a completely Democratic legislature. That didn’t happen by accident, Chris. That’s real, strong leadership.

WALLACE: Okay, finally in the time we have left. I’d like to do a lightning round. Quick question —

CHRIS CHRISTIE: Let’s do a lightning round baby, let’s go.

WALLACE: All right, here we go. You’re getting some blowback this weekend because you suggested that we should track foreigners who were in this country on visas and they overstay them the same way that FedEx tracks packages and critics are saying, people aren’t packages.

CHRIS CHRISTIE: They’re not, but what my point was was that this is once again a situation where the private sector laps us in the government with the use of technology. Let’s use the same type of technology to make sure that 40% of the 11 million people here illegally don’t overstay their visas. If FedEx can do it why can’t we use the same technology to do it –

WALLACE: How would you be able to tell if somebody overstayed, I mean they don’t have a number, you know, a label on their wrist.

CHRIS CHRISTIE: No, we can do it. And we should bring in the folks from FedEx to use the technology to be able to do it. There’s nothing wrong with that. And I don’t mean people are packages, so let’s not be ridiculous.

WALLACE: You say the growth of Medicaid could bankrupt the country, and yet, you expanded Medicaid in New Jersey under Obamacare.

CHRIS CHRISTIE: Yeah, I expanded Medicaid because it was right for New Jersey. Because I had had three liberal Democratic governors before me that had so expanded Medicaid that we actually made money in New Jersey by expanding Medicaid and lowered our costs in emergency rooms across the state. My job is to work for the taxpayers in the state of New Jersey. When I become president of the United States, then they’re going to get that same effort from me for the entire country, and remember this, Chris – no tax increases from me in six years, $2.5 billion less in spending. We have stood up to a Democratic legislature and gotten the job done, unlike people here in Washington, D.C. who haven’t. Little long for a lightning, but keep going.

WALLACE: Yeah, you broke the rules. Should businesses be allowed to decide whether or not to serve gays or anyone else based on religious freedom?

CHRIS CHRISTIE: Religious institutions should be able to decide how they conduct their religious activity. The rest of the folks in the United States need to follow the law.

WALLACE: Meaning if I am a baker and I’m being —

CHRIS CHRISTIE: I’m not — listen, I’m not — but, Chris, I’m not going to get into every example. A baker, a candlestick maker. I’m not getting into every example. I’m someone in this country who believes in law and order. I’m a former prosecutor, I’m the only former prosecutor who’s going to be on that stage in California. We need to enforce the law this country in every respect. Not just the laws we like, but all the laws. This way we won’t have sanctuary cities in the country when I’m president of the United States, and we won’t have people getting high on marijuana in Colorado and Washington if the federal law says you shouldn’t.

WALLACE: Finally, what should voters think of any of your rivals who say we can preserve Medicare and Social Security without cutting benefits.

CHRIS CHRISTIE: They’re not telling the truth. They’re just not telling the truth. I guess the alternative could be, Chris, they want a massive tax increase on the American people and if they want that, that’s fine. Here’s my attitude about it, you got two choices to either get rid of some benefits for the very wealthiest in America who don’t need a Social Security check and I’ve talked about that, or you can give the government that’s already lied to us and stolen from the trust fund more of your money. I ‘gotta tell you the truth, I don’t want to give the government more of our money so they can lie more to us and steal more from us.

WALLACE: Governor Christie, thank you. Thanks for talking with us. You’re in midseason form, aren’t ‘ya.

CHRIS CHRISTIE: You got it baby. I’m hot. Ready to go.

WALLACE: I don’t think I ever had a candidate — Donald Trump might say that, “I’m hot baby.’