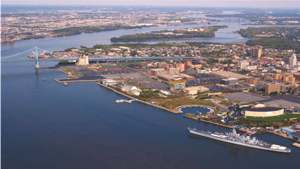 The Christie-Norcross alliance remains a hallmark of the first named partner’s gubernatorial administration, Save Jerseyans, but as the Republican Governor’s popularity has waned, his party’s Camden cadet branch has increasingly struck out on their own, at least on the messaging front.

“It’s wonderful the County Democratic machine lined up in Camden to talk about a major development, unfortunately they’ve been doing that since at least 1998,” explained Liddell, a West Point graduate. “Back then it was the Simon DeBartolo Group proposing an entertainment center with a 3,000 seat amphitheater, two ice-skating rinks, retail shops, restaurants, historical displays, and a movie theater with at least 15 screens.”

Christie makes frequent visits to Camden to hawk everything from development projects and the new county-wide police force embraced by President Obama to social spending experiments, like an after-school dinner program and unorthodox approach to drug addiction, that aren’t exactly popular with the GOP base.

Camden County Republicans aren’t impressed by the results thus far, citing “a mass exodus of experienced police officers” and jump in Camden’s murder rate over 2014 as tangible evidence of the city’s ongoing struggles, ones which they don’t think more promises can fix.

“The Camden County machine politicians have been on a decades-long quest to build a new towering Tammany Hall. Their history of announced projects that never got off the ground is lengthy,” added Stone. “The Delaware River Tram and the Conference Center and Hockey Arena instantly come to mind. They failed twice with the hockey arena, first in Pennsauken then Lawnside. Of course there’s the $1.1 billion project announced for the Cramer Hill section of Camden with former Governor McGreevey and Cherokee Investment Partners. That project was supposed to bring $20 million a year in new property tax revenues but never happened. Forgive us for appearing cynical but we’ve heard this song many times before.”

For those of you who are new to the Camden saga or just lost track (understandably), the Cherokee development of Cramer Hill was heavily litigated and ultimately bore little fruit.