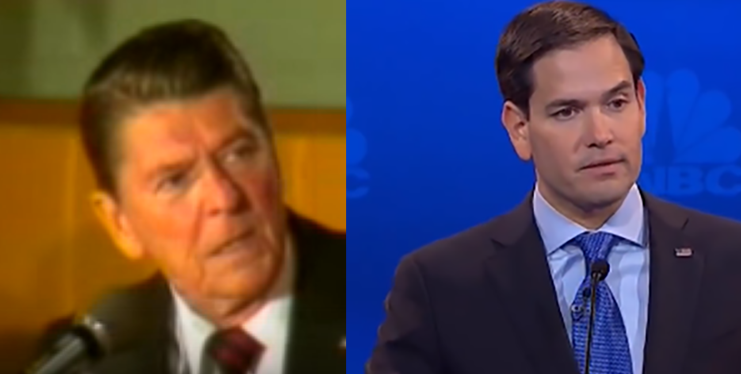 It’s the date when, after a poor performance in Iowa, Ronald Reagan paid for a Nashua Telegraph debate that didn’t happen but nevertheless catapulted him to the presidency, Save Jerseyans.

The original plan was for a one-on-one debate between himself and Jeb Bush’s father just three days before the primary. The Federal Election Commission had ruled that the newspaper could not sponsor a debate without all of the GOP candidates; Reagan needed the boost, and George H. W. Bush wanted to take on Reagan by himself so the then-front runner refused to contribute to the cost.

Everyone showed up at the Nashua High School gymnasium including second-tier candidates Senators Bob Dole and Howard Baker, and Congressmen Phil Crane and John Anderson (former Texas governor John Connally couldn’t get there in time). Backstage wrangling ensued. When the two leading candidates finally took to the stage, and Reagan forcefully argued for the inclusion of the other candidates on-stage, the perturbed moderator tried to cut off Reagan’s mic.

Big mistake. The Gipper famously responded, “I’m paying for this microphone, Mr. Green.” The other candidates walked off and the crowd went crazy:

I can’t help but wonder if Marco Rubio had a similar moment last night when the media (and then Jeb Bush) tried to take him down in this extended exchange:

Re-watch Marco's take down of the GOP establishment, the liberal media, and Jeb Bush's campaign.

The media retort was good but his response to Bush was better.

“When you signed up for this, this is a six-year term, and you should be showing up to work,” the polling-challenged former Governor said, attempting to shame his former Florida legislative mentee. “You can campaign or just resign and let someone else take the job.”

“I don’t remember you ever complaining about John McCain’s vote record,” Rubio replied without missing a beat. “The only reason why you’re doing it now is because we’re running for the same position, and someone convinced you that attacking me is going to help you.”

And the crowd was in the palm of his hand.

Masterful. Dominate. Reagan-esque. The student has more than become the master.

2 thoughts on “Marco Rubio’s “I paid for this microphone” moment?”