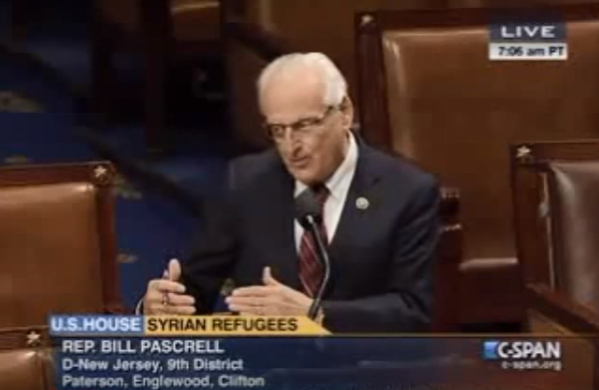 Well, the House overwhelmingly passed H.R. 4038 (by 287 to 147) on Thursday, Save Jerseyans, giving the “American Security Against Foreign Enemies (SAFE) Act” designed to stop the Obama Administration’s plan to continue resettling unvetted Syrian “refugees” in our county a veto-proof majority on the same day that DHS caught eight Syrians attempting to cross the Texas border (!).

“My top priority is the safety and security of the American people, and last week’s horrific attacks on Paris are a stark reminder that our enemies are willing to impersonate refugees and go to great lengths to commit acts of terror,” explained Rep. Scott Garrett (R, NJ-05) in a statement after the bill’s passage. “The Syrian people seeking refuge need the continued support of the international community, and we must continue to work on a balance between helping these people and our national security.”

Bill Pascrell (D, NJ-09) was one of the dissenters, but his arguments were 100% emotional:

“Yeah, you may smile over there, but I’m very serious about what I’m saying,” Pascrell chastised a colleague while appearing to choke up. “This is a very serious moment in our history. I want to protect America. I want to be strong. I don’t agree with all of the president’s Syria policies. But I think we’re doing harm to ourselves in sending the wrong message.”

His exact objection to the common sense SAFE Act.

Here are the details shared by the office of our friend Rep. Leonard Lance (R, NJ-07):

•Certification: Iraq and Syria refugees only admitted if Nation’s top security officials — Secretary of the Homeland Security, FBI Director and Director of National Intelligence — certifies to Congress that each refugee is not a security threat with monthly reporting to all 12 congressional committees.

•IG Review Certification: DHS Inspector General shall conduct a risk based review of all certifications and provide an annual report detailing its findings to the appropriate committees.

“The threat of ISIS is not contained as the President has suggested. It is not going away. So until there is a certification process in place to prevent terrorist threats in America, the Syrian and Iraqi resettlement program should be paused,” added Lance.

Yup. So again, with all due respect to the Congressman: what does Rep. Pascrell find so objectionable?

It’s the kind of intellectual incoherence you’d expect from people who are ruled by emotion.

Welcome to the Left.