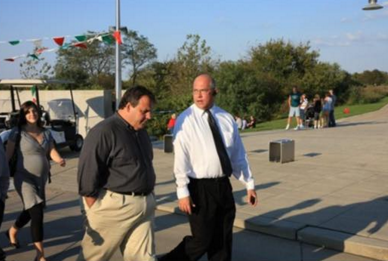 A veteran of the 2009 Christie campaign had harsh words for his former boss on Friday as Republicans across New Jersey continue to debate historic legislative losses.

“Every electoral loss in South Jersey, including my friend Assemblyman Sam Fiocchi, is courtesy of Governor Christie completely forgetting about Republicans in the southern end of the state,” operative Steve Kush argued in a strongly-worded press release. “His lack of caring about South Jersey trickled down to his team. I remember earlier this year after a macroburst storm ripped through southern New Jersey, leaving hundreds of thousands without power, many for up to a week, he was nowhere to be found. A local mayor asked me to reach out, I did, and I was immediately told by a key staffer of the governor’s that they were ‘sick and tired of South Jersey’s whining.’ That attitude is only part of the problem.”

A well-known veteran of South Jersey GOP campaigns in Camden, Gloucester and Cumberland counties in the 1990s and 2000s, credited and criticized for his tough tactics and a flamboyant style, Kush had most recently managed the uphill 2015 county-wide campaign in Camden County where the Republican slate protested the Governor’s Election Eve confab with Democrat leaders in Camden City. He developed a reputation for his strong opposition research skills in New Jersey campaigns prior to relocating to the Southwest and a controversial tenure as a county executive director in New Mexico.

“Bottom line, after looking at all the facts, the blame for Republican electoral losses fall squarely on Governor Christie and his team. The attitude toward South Jersey by his staff, coupled with the governor’s cozy relationship with the South Jersey Democratic Party Boss added up to the perfect recipe for electoral defeat,” Kush added. “His defenders need to stop blaming the map, maps don’t vote, and my fellow Republicans who have quietly complained about the governor for years need to stand up for themselves. As to Mr. Christie, he should suspend his vanity presidential campaign immediately because his unwillingness to stand up to a local political party boss proves Americans can’t expect him to stand up to Vladimir Putin.”

Christie, for his part, shrugged off his Garden State critics from the New Hampshire campaign trail.

“I don’t think it says a whole lot about me except that when you’re a second term, term-limited incumbent, you’re midterm stinks – it always does, whether you’re a president or whether you’re a governor,” Christie opined to reporters on Friday. “I did everything that I could do.”