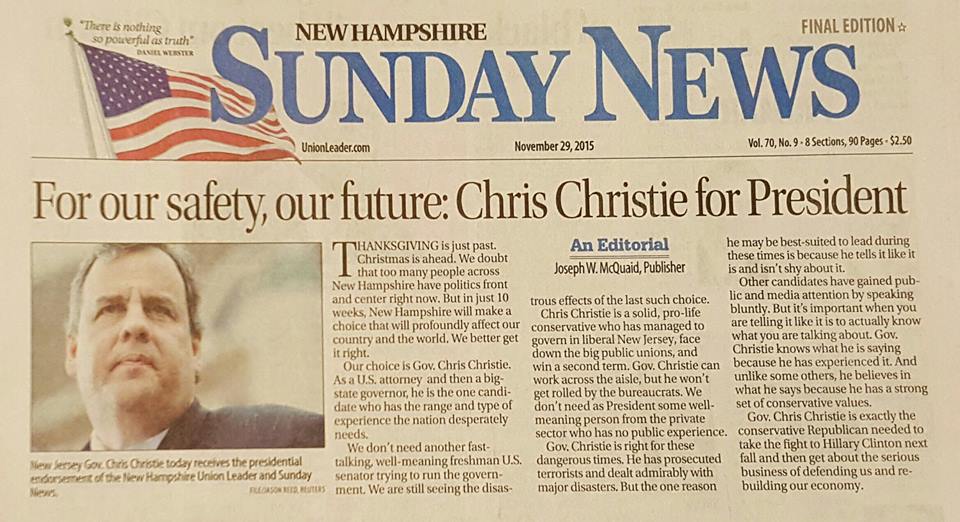 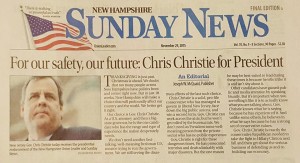 It hasn’t yet impacted his polling position, Save Jerseyans, but Governor Chris Christie‘s tireless campaigning in New Hampshire has earned him the endorsement of the Granite State’s most influential newspaper.

“Gov. Christie is right for these dangerous times,” the New Hampshire Union Leader’s publisher, Joseph McQuaid, opined in the editorial. “He has prosecuted terrorists and dealt admirably with major disasters. But the one reason he may be best-suited to lead during these times is because he tells it like it is and isn’t shy about it.”

Newspaper endorsements nevertheless don’t mean what they used to back in the day, and even before its circulation dropped considerably like most papers, the Union Leader’s record of picking winners in contested primaries is mixed. The powerful paper has backed Pete du Pont in 1988, Patrick Buchanan in both 1992 and 1996 Steve Forbes in 2000 and Newt Gingrich in 2012. None of those candidate went on to win in New Hampshire except for Buchanan in ’96, and none of these candidates, including Buchanan, won the nomination.