Red cup? Red herring! But here’s a little advice for the genuinely offended. 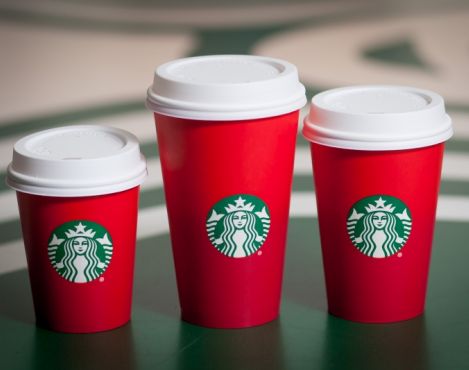 All everyone is talking about this week is that damn Starbucks holiday cup that’s red, Save Jerseyans, with the iconic green and white logo rounding out the Christmassy color scheme but devoid of any religious or secular Christmas imagery. As if seeing Frosty or the Star of Bethlehem on the cup would transform drinking Seattle’s overpriced, crappy brew into a spiritual experience!

But let’s not blindly accept the media narrative and ask whether there are, in actuality, many folks out there genuinely foaming (pun intended) at the mouth over a red cup design change?

Use the minds God gave you. Viral material is often difficult to trace to its source but there’s plenty of evidence that this faux controversy was initiated, or at least taken viral, by liberal trolls, not outraged religious conservatives, and a quick scan of my Facebook and Twitter feeds suggests that there are far more people complaining about the alleged controversy than actually participating in fueling it.

Red cup? Red herring. You’re more than likely being played, folks. Perhaps even by Starbucks itself? It’d make sense on multiple levels. A company that openly markets to areligious liberals (because market research shows areligious liberals prefer to drink their coffee relative to other consumer groups) has everything to gain from perpetuating a perception that the so-called religious right hates them.

However, in the unlikely event you’re genuinely offended by the holiday marketing preferences of a major corporation, here are two things I’d like you to consider:

First and foremost, ridicule is far more effective than righteous indignation in the social media sphere.

Humans have painfully short memories. Back in March, Starbucks abandoned its goofy #RaceTogether campaign after the Internet… threw a temper tantrum? Nah. Tweeters and bloggers made fun of it. Hard. Remember: uptight almost always loses! As do conservatives until we finally learn and internalize this simple but hugely important lesson.

Secondly, a better way to save Christmas might be to practice Christianity!

Right? I wonder how many of those individuals who actually did take to Facebook to complain about the red cups did something in the past year like, for example, invite a friend who isn’t religious to church services. Don’t misunderstand me: I happen to strongly agree that America’s secularism streak isn’t a healthy thing. At the same time, I’m no less sure that this troubling trend will continue if Christians stop teaching in favor of shrill complaining and, hypocritically, start demanding their own “safe spaces” in the free market. Go back to the text. Jesus was a teacher after all. He planted the seeds of a global revolution by preaching, not bullying which is a tactic of the Left.

So God rest you merry, Gentlemen! Let nothing you dismay. Christmas will always be Christmas provided you work hard, stay true, and abstain from making hay for the sake of… well, making hay. Over a stupid web troll or an even less consequential red cup.

5 thoughts on “Red cup? Red herring! But here’s a little advice for the genuinely offended.”