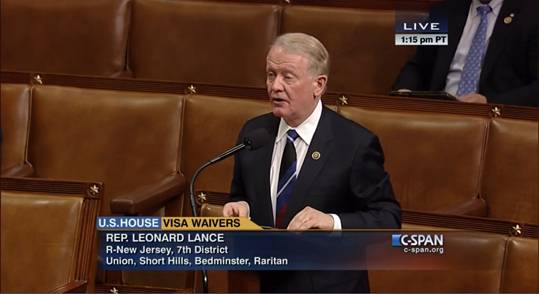 “Passing H.R. 158 will close a dangerous loophole that we know terrorists will exploit to carry acts of terror here in the United States. Terrorists such as September 11th’s ‘20th hijacker’ Zacarias Moussaoui and shoe-bomber Richard Reid both used the Visa Waiver Program to enter the United States. We must be more vigilant in the face of these great threats,” Lance said from the House Floor. “This legislation comes at a critical time. The heinous acts of terror and mass murder perpetrated in Paris and San Bernardino demonstrate the alarming strength and reach of ISIS and its allies. This threat is certainty not contained and our fight against radical jihadists at home and abroad must be the Nation’s most pressing issue.”

Interestingly, the broad terms of the Act don’t directly impact the so-called fiance visas that one of the two San Bernardino used to enter the country:

· Mandates the Secretary of Homeland Security suspend participation of countries in the Visa Waiver Program if they do not share terrorism and foreign traveler data with the U.S;

· Directs that the Electronic System for Travel Authorization (ESTA) be a counterterrorism tool and requires DHS to consider including additional information pertaining to terrorism threats to better screen foreign travelers;

· Requires an annual threat assessment conducted by the Director of National Intelligence and DHS to assess information sharing between Visa Waiver Program countries and the U.S;

· Requires an annual intelligence assessment conducted by the Director of National Intelligence and DHS to assess airport, passport and travel document standards;

· Directs DHS to report, within 30 days, on what additional data might be necessary to improve ESTA as a counterterrorism tool to screen travelers.

Next up: the Senate will vote…