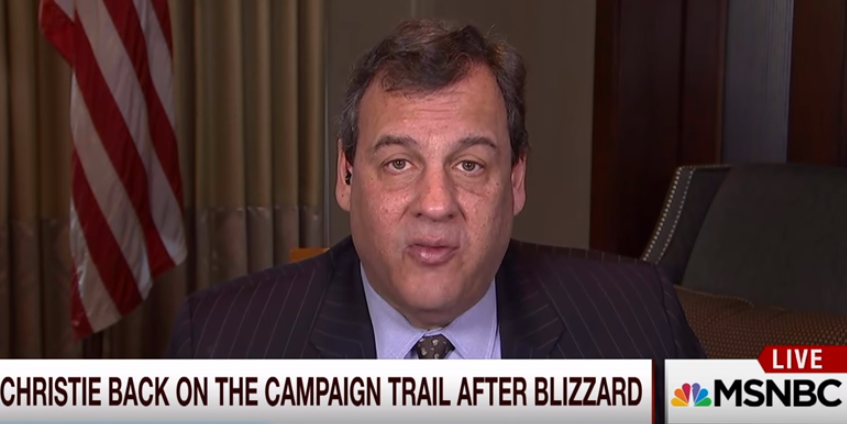 (UPDATE #1: The criticism he’s been getting for his MSNBC comments elicited the following Monday evening statement from Governor Chris Christie’s press shop:

We are pleased that today has been such a productive day for businesses and citizens in New Jersey only 48 hours after one of our largest snowstorms in the last six years. I commend the Department of Transportation for clearing our roads so quickly and effectively. I also commend NJ Transit for helping so many commuters to get to work today without incident.

“I have dispatched teams to Cape May, Atlantic, Ocean and Cumberland counties today, led by the Lieutenant Governor and DEP Commissioner, to assess any damage. They report the flood waters have, in the main, receded and that only 500 power outages remain from a high during the storm of approximately 100,000. I have also sent the leaders of the Economic Development Authority to work with any businesses which sustained any damage.

“I also dispatched at 8:00 a.m. today the Office of Emergency Management to do Preliminary Damage Assessments to see if we meet the required minimum to apply for Federal Disaster Relief. No declaration of disaster can be made until we determine whether we have reached that damage threshold. That process will take days to complete.

“Our Administration and the people of New Jersey deserve great credit for the way we have effectively dealt with this storm. We will continue that effort until the job is done.”)

I just don’t know what to say anymore, Save Jerseyans. I really, truly don’t.

North Wildwood alone is projecting $10 million worth of damage to its dune system after flooding all along the coast and historic tides in the Southern Jersey Shore from this weekend’s blizzard, but Governor Chris Christie continued to downplay the storm’s impact during a Monday A.M. remote appearance on MSNBC’s Morning Joe program, raising eyebrows by claiming that there was “no residual flooding damage” from the blizzard:

Sam, I don’t even know what critics you’re talking about. There is no residual damage, there is no residual flooding damage. All the flooding receded yesterday morning. And there was no other damage. People were driving around the streets yesterday morning in New Jersey. This is just what they wish would have happened. Unfortunately for them we know how to do this. We managed the storm extraordinarily well, New Jersey transit was back at noon yesterday after the storm, our roads were all open as of 7:00 a.m. yesterday and so, you know, I think that’s just folks who want to criticize me for anything that I do. I have not heard any of that criticism, I haven’t seen any of that criticism and I think you are just making it up.”

Look: is politics behind some of this? Of course. We’re one week away from the first big vote. Everything is political until further notice. He’s got a narrative and he’s sticking to it.

At the same time, was the damage as bad as Sandy overall? No, not overall. So when he originally said “we dodged a bit of a bullet” over the weekend, I think it’s fair to assume he was understandably, at least to some extent, using the multi-billion dollar Sandy disaster as his point of reference for comparative purposes. A couple of towns were DESTROYED during Sandy. That didn’t happen on Saturday.

But the point of view matters here, too. This weekend’s damage WAS worse than Sandy for some Cape May County communities which were largely spared when the 2012 super storm’s storm surge disproportionately attacked Ocean and Monmouth counties’ respective barrier islands. My adopted home town of Sea Isle City got smacked. In nearby Avalon and Stone Harbor, as many as 20% of homes may have sustained at least some flood damage. I’m sure the damage here is 9-figure damage. According to ABC 6 in Philly, state officials including DEP inspectors are touring shore points today to assess the damage.

Why are members of the Governor’s administration touring “residual damage” that their boss says didn’t happen?

Because there was, in fact, residual damage. A decent amount of it. Not on the same scope as Sandy, no doubt, but enough that Governor Christie should’ve known better than to be so dismissive when people’s homes and businesses are having a very bad Monday.