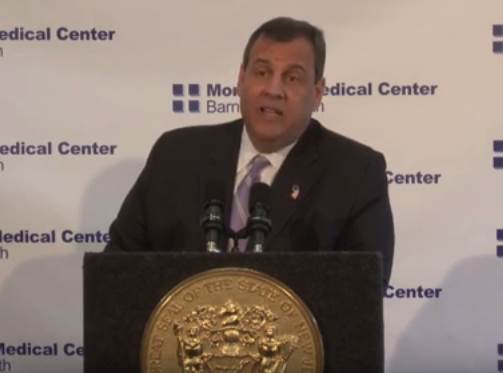 Is an A.C. takeover inevitable? We’ll see. Governor Chris Christie was in rare form when a Tuesday presser at Monmouth Medical Center moved to the topic of Atlantic City on the heels of news that A.C. government could shutdown for a few weeks beginning April 8th.

No one was left unscathed:

The bottom line is this, let’s talk about Atlantic City for a second here. The Atlantic City government costs two to three times more to operate than any other municipal government in this state. Two to three times more. The $25 million that Mayor Guardian runs around trumpeting is a literal drop in the bucket to the hundreds of millions of dollars in debt that Atlantic City is facing. They are absolutely incapable, unwilling and incapable, of fixing this problem. …

And I am no longer going to allow the taxpayers of the state of New Jersey to be responsible for the irresponsible decisions made by mayors before Mayor Guardian and councils, and put a Band-Aid on this issue. We have reached a bipartisan agreement with the Senate on two bills: A pilot bill that would help to bring greater stability to Atlantic City’s property tax base, and a state takeover bill that would give us the tools necessary to fix the problems that plague Atlantic City’s government. I want to be very clear about this. If both bills do not come to my desk in exactly their current form, I will not sign them. If the legislature were to just send me the PILOT bill, I will not sign it. And if what that means is that Atlantic City goes bankrupt then go to Vincent Prieto’s office and ask him why.

I am not going to negotiate with two sets of Democrats, quite frankly. If the Democrats can’t come to an agreement amongst themselves, then they are the ones responsible for this. I have sat down with the Democrats in the Senate and we reached a broadly supported bipartisan agreement. Mr. Prieto wants to play public sector union politics for his own future political aspirations and the aspirations of the Hudson County political boss, Steve Fulop. Well, ok. They want to play those political games, they can play them. But I am not going to use the taxpayer money of the state of New Jersey to fund their political aspirations. We need to fix Atlantic City. And the elements of fixing that is the ability to renegotiate their debt situation, to work on the cost of government, which as I said, is two to three times greater than any other major city in this state. Imagine, that you could look at other cities in this state as paragons of fiscal conservatism compared to Atlantic City. I am not going to permit the people of this state to be held responsible and have their pocketbooks picked again by Atlantic City.

So, Mayor Guardian has a very clear choice, two choices. He can either work with us to fix the problem through the state takeover bill and the PILOT bill, or he will face, on April 8th, having no money to pay his municipal employees. Then he leads to May, when he gets some property tax payments. Well, he is still going to run out of money then. I am not opening the treasury of the state of New Jersey to people who cannot manage their affairs responsibly. And also, last thing Elise, I am not going to take this job, and it would be a difficult job, to manage Atlantic City government and to manage their enormous debt problems, if I do not have the tools to do it. So the idea from Speaker Prieto that somehow public sector employees should be exempted from the sacrifice that needs to be made in Atlantic City because of all the irresponsible decisions that were made before. I mean for god’s sake, you have lifeguards who get pensions in Atlantic City. Lifeguards get pensions in Atlantic City. I mean can we, please. This is ridiculous. So, the mayor can decide to do one of two things: either cooperate, along with Speaker Prieto, or the inevitable will occur. And the inevitable is that they will face bankruptcy and if they do, then the bankruptcy court will control their fate, not the state of New Jersey. If that is what they prefer, it is their choice.”