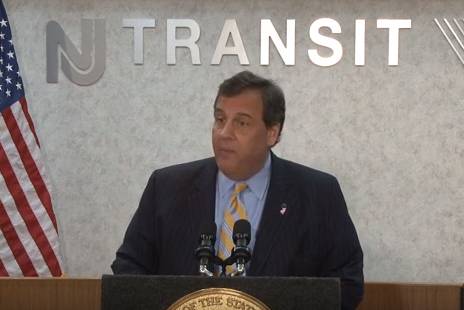 Workers were scheduled to go on strike at 12:01 a.m. Sunday:

Governor Christie: I’m here this evening to confirm that NJ Transit has come to a tentative agreement with the coalition comprised of all 11 unions, representing over 4,200 New Jersey Transit employees. The agreement of course must still be ratified by the rank and file members of the union. It’s good news on many levels. First, we averted a strike and the damage it would do to our economy and we reached an agreement that is longer than the Presidential Executive Board recommendation, covering not only the period since 2011, when the last contract expired, but now through the end of 2019. This is going to give workers and commuters a measure of certainty and stability as we go forward. This agreement has come after long and hard negotiations and compromises on both sides. I want to thank all the people of New Jersey Transit and our negotiator and the union representation for maintaining good faith negotiations throughout all the talks and for avoiding what could have been a very difficult, troublesome work stoppage. Not only for the employees of New Jersey Transit, but also for the commuters who use New Jersey Transit every day. From the perspective of the New Jersey taxpayers and the New Jersey Transit fare payers, who I represent, I want to let you know- we have settled the contract with their interest being placed before any other interest. That is a reform we promised when I first became governor and one that I promise to continue to champion over the next two years in New Jersey. I am very happy that we resolved this agreement before our transit system and our economy were disrupted by the threatened strike. And again, I want to thank everyone who helped to make it possible.  I am happy to take your questions.