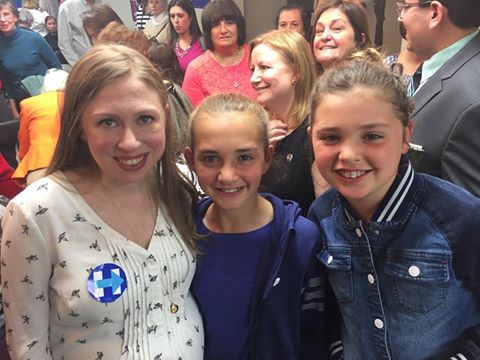 It keeps getting better, Save Jerseyans.

The children picture below aren’t just the daughters of a random Clinton supporter. I should’ve known better! They apparently belong to veteran Democrat operative Maggie Moran and her husband, Belmar Mayor Matt “Pay to Play” Doherty, who’s running for freeholder in Monmouth County this cycle: 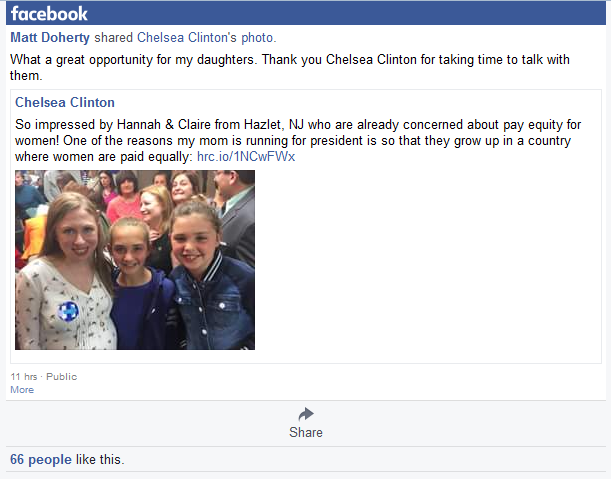 I hate it when politicians use kids as props, Save Jerseyans.

I didn’t like it when Trump’s campaign did it anymore than I liked it when Obama did it. I’m an equal opportunity opponent of anything that dumbs-down America’s political discourse worse than it already is.

Politics is the art of persuasion. That’s a given. But there’s something far too manipulative and yes, creepy, about using children to make a point. No one honestly believes the children are doing anything other than parroting what their parents are telling them. Why would I change my vote based on the testimony of what amounts to a human puppet act? Children should get to be… children. You can get them involved in the political process without treating them like stage props. After all: are they learning the right lessons if THAT is their first foray into politics?

Chelsea Clinton learned from some of the best manipulators on the planet. So, during a Tuesday campaign swing for her mom through Hazlet (Monmouth County) ahead of the June 7th New Jersey presidential primary, this photo and accompanying caption made its way to Facebook:

“So impressed by Hannah & Claire from Hazlet, NJ who are already concerned about pay equity for women! One of the reasons my mom is running for president is so that they grow up in a country where women are paid equally,” the younger Clinton explained via her Facebook page.

First off, again, these girls don’t look old enough to fully understand equal pay or any other economic issues. That’s not meant as an insult: I’m sure they’re still 10-times more intelligent, even in grade school (?), than 90% of our state legislators. The bar is low.

My more pressing concern: like the NJEA, Team Clinton isn’t interested in educating the next generation. There is no gender wage gap in 2016. If Hilldawg & Co. want to live in a country where women are treated equally, then why don’t they start by telling these kids the truth? Or perhaps, when they’re older, explain how well Hillary’s husband has treated the women in his own life?

There’s the rub. Team Clinton and its flunkies don’t want young girls to grow into independent, free-thinking women who question campaign sloganeering. They want a larger herd of Democrat sheep whom they can use as props for political theater whenever the situation dictates. You know it, I know it, and anyone who hasn’t sublet their brain knows it.

Please don’t let them get away with it! For once.

One thought on “Chelsea Clinton swings through Hazlet, uses kids as props for mom’s campaign”