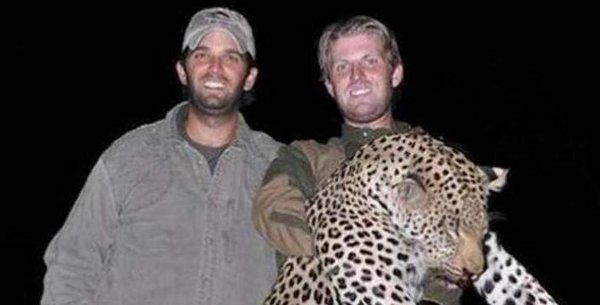 Late last year, Save Jerseyans, around the same time that a highly-publicized study found records numbers of New Jerseyans living in poverty under Democrat rule, this picture of Donald Trump’s sons Eric and Donald Jr. began making the rounds online:

#Trump brothers wipe those smiles off your faces & if you bring another "trophy" into NJ we'll lock you up pic.twitter.com/PiO3TTm1jc

The photo is legit. And there are others.

The guy tweeting it out this week is state Senator Ray Leniak (D-20); for those of you who are newer to N.J. politics, he’s a faaaaar left Democrat and veteran Clintonista who cares more about pigs than people. He’s also forgoing reelection and might seek the 2017 Democrat gubernatorial nomination.

A bill he pushed is about to become law. Last Thursday, both hours of the legislature voted to adopt a ban on importing “trophy”-killed animals from African big game hunts into New Jersey including parts taken off of elephants, leopards, lions, tigers, rhinos, cheetahs, pangolins, marine turtles, and rays.

The passed legislation reflects changes requested pursuant to a prior conditional veto from Governor Chris Christie. So yes, ironically, the guy who is heading up Donald Trump’s transition (Christie) could be responsible for Trump’s sons facing penalties should they attempt to bring future trophies through Newark’s Liberty Airport.

Trump Sr., by the way, says he’s not in love with his sons’ hobby. For whatever that’s worth to you.

“My sons love hunting. They’re hunters and they’ve become good at it.  I am not a believer in hunting and I’m surprised they like it,” Trump reportedly told TMZ.

I’m with Trump (it happens from time to time).

I’m not opposed to hunting writ-large by any means, but ripping the tails off of endangered species doesn’t really seem like “sport” to me. Conservation – and protecting humans – should always be the goal as it is with our state’s much-maligned black bear hunt. There are arguments about what big game hunting means for local economies; that’s a discussion for another post.

I do know what Trump should say, right now, if confronted about his sons’ hobby by Lesniak: shouldn’t these Democrats spend a little more time worrying about people? Like the New Jerseyans living below the poverty line thanks to Democrat economic policies? And a little less time stressing over what two rich kids do with their time, and animals, on another continent?

Your priorities never cease to amaze me, Ray!