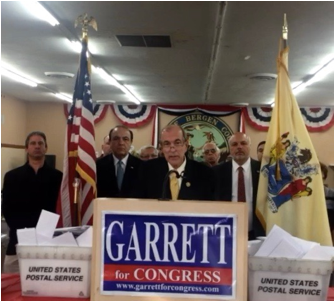 This year’s particularly ugly and exceptionally competitive NJ-05 House race came to a head on Wednesday when incumbent Scott Garrett (R) held a rare press conference to rebut purportedly fabricated allegations of an ethics investigation into the Republican congressman.

Garrett says the attack is more insidious than a normal election salvo.

The Congressman claims his Clinton-affiliated Democrat opponent Josh Gottheimer didn’t just lie but actually went so far as to fake a government document for a campaign advertisement.

The original controversy stems from a 2015 ethics complaint, aimed at Garrett and several other members of Congress, accusing the North Jersey conservative of pay-to-play violations. Flashing forward to 2016, Garrett’s anger was roused this week when a Gottheimer advertisement featuring the allegedly fictitious letter aired on television. Without any context, Garrett says the allegedly faked document would mislead to the viewer into believing an investigation had been initiated by the Office of Congressional Ethics (OCE).

The problem with that? Garrett says no investigation ever arose from the watchdog group’s complaint.

No disciplinary action has been taken against him resulting from the complaint and, what’s more, the Congressman insists the OCE independently confirmed that the complaint never resulted in an investigation.

“Josh created a fake government document so he could spread more lies,” Garrett explained flanked by Bergen County GOP Chairman Paul DiGaetano and other party leaders. “This is a disgusting abuse of the influence he has as someone running for public office. My campaign is sending a cease and desist letter to televisions stations demanding that they remove this false advertisement immediately. But it shouldn’t have to come to this, Josh should know better.”

“Not a single one of the allegations against me was ever deemed worthy of review.”

A side-by-side comparison of (1) the allegedly fictional letter from the ad and (2) the letter provided by the Garrett campaign can be viewed here.