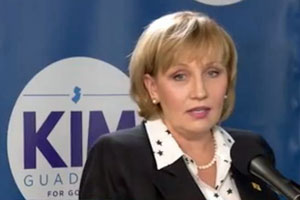 In case you missed it, Save Jerseyans, Lieutenant Governor Kim Guadagno‘s gubernatorial campaign announced on Wednesday that it had has raised over $430,000 since January 17th.

That means she’s met the bare minimum ($430,000) enough to qualify for public matching funds for the 2017 primary election. She’s the first Republican to do so.

“Meeting this important fundraising goal just over a month after launching our campaign shows that New Jerseyans are eager to support Kim Guadagno’s campaign and her positive message for the future,” said Dave Huguenel, campaign manager for Guadagno for Governor, in a statement obtained by Save Jersey. “With strong financial backing, endorsements in all 21 counties and a plan to make New Jersey better through lower taxes and auditing Trenton, the Lieutenant Governor is well positioned to win the primary in June and defeat the tax and spend Democrats in November.”

In New Jersey, a campaign qualifies when it raises a minimum of $430,000 and, in addition, can demonstrate to the Election Law Enforcement Commission (ELEC) expenses/commitments of at least $430,000.00.

If the Commission signs off? The qualifying candidate gets 2:1 matching funds from ELEC, or $2.00 in public money for every $1 raised throughout the primary up to a maximum match of $4 million. Candidates must then requalify for the general if, of course, they make it that far.

Historically, Guadagno’s on pace with other recent gubernatorial contenders.