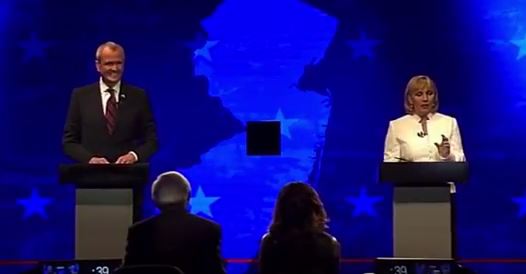 Former Goldman Sachs banker Phil Murphy, the Democrat nominee for NJ Governor, declared unequivocally that he would make New Jersey a sanctuary state, should he be elected and should Congress fail to act on DACA before the March 5, 2018 deadline set by President Trump when he revoked former President Obama’s Executive Order which gave extra-constitutional protections to illegal immigrants who were brought into the United States as children.

Lt. Governor Kim Guadano, the GOP Gubernatorial nominee, declared she would follow the law, noting that she is  former federal prosecutor, state prosecutor and a former Monmouth County Sheriff.

END_OF_DOCUMENT_TOKEN_TO_BE_REPLACED

One thought on “Murphy would make New Jersey a Sanctuary State, Guadagno would follow the law”