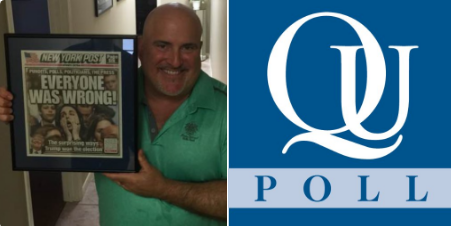 “Lt. Gov. Guadagno could not be in a worse situation. Phil Murphy leads her among most voter groups and the state’s electorate gives her an unfavorable rating overall,” opined Peter A. Brown, assistant director of the Quinnipiac University Poll. “What’s more, politics is a team game. Guadagno’s GOP teammates – President Donald Trump, with a 33 percent job approval rating, and Gov. Christopher Christie, with his 15 percent approval rating – are clearly pulling her down.”

You can click here to read the full polling report and cross tabs.

The Guadagno campaign isn’t buying it.

“Public polls have been wrong time and time again, and this Quinnipiac poll is no different. They used a random digit dialing methodology, a great methodology if you’re doing market research to sell soap but a terrible methodology for most elections, which is why internal campaign pollsters avoid it,” said Adam Geller, the Guadagno campaign pollster who most recently polled for the Trump campaign in 2016’s Midwestern battleground states.

Geller’s own internal campaign polling reportedly had his client trailing by only 7 points in September.