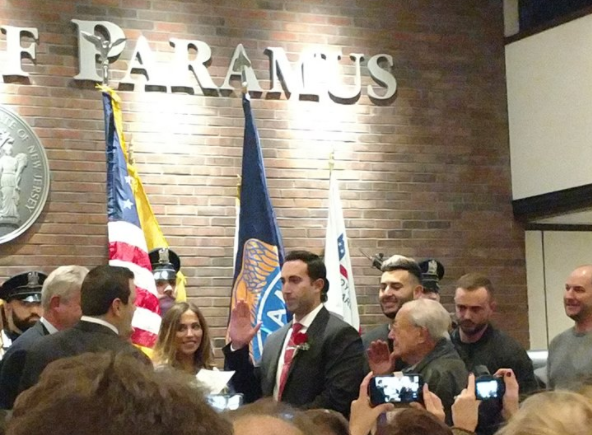 Most North Jerseyans  know Paramus only as the retail capital of New Jersey, but the town of 25,000 is a key political town in the state’s most populous county.

Won by Chris Christie, Cory Booker, Donald Trump and Phil Murphy, it often controls which direction the county goes and serves as a bellwether for electoral trends.

Republicans have been out of power locally since 2011, but they took another step closer to regaining control on Tuesday night when 26-year-old rising star Chris Di Piazza was sworn into his seat. Di Piazza, a first time candidate whose campaign was driven by grassroots organizing led by Young Republican allies like Matt Gilson and Carlo Ghione, was the only Republican to beat a Democratic incumbent in Bergen County last year in a town won by Phil Murphy.

The victory has large ramifications. If Republicans are ever going to return to power in a county they once handily controlled, they must enjoy healthy margins in the perennial swing town. In 2018, for the first time in nearly a decade Republicans, can return to power by winning two of the three seats at-stake.

Democrats will get a head of steam from favorite son and former Mayor, Jim Tedesco on the ticket in his re-election bid for County Executive. Mayor Rich LaBarbiera is also up for re-election along with Councilman Pat Verile and Councilwoman Holly Tedesco-Santos, both of whom won with razor thin margins in 2015.

Following the stunning victory, there is no shortage of Republican candidates lining up to take a crack at 2018. While Di Piazza has ruled out for running for mayor this year, there are a litany of qualified Republicans currently exploring a run including former Freeholder John Driscoll who enjoys a strong base of support in his home town. Could he pull the path of his former Freeholder running mate Rob Hermansen and reinvent himself in a local role?

Paramus should easily see a six figure race on both sides in 2018 with control at-stake and its important status to the congressional district and the county. LaBarbiera is easily the most endangered Democratic mayor in the county.

But, for now, Republicans can pleasure in knowing that the future is alive and well in Paramus.