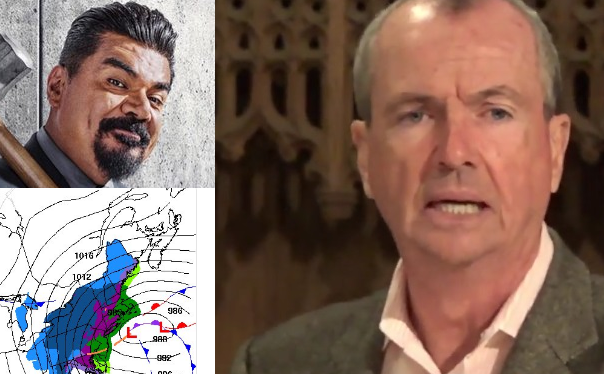 Chris Christie didn’t begin to check out until about two years into his gubernatorial tenure, Save Jerseyans. And we got stuff like the property tax cap and arbitration reform in that time.

We didn’t get two good months out of this joker! Something we’ve been discussing on the reg (as the kids say) here at Save Jersey.

The latest example that our new governor’s head is already somewhere else (hint: up his rear end): on Friday, as around 200,000 New Jerseyan homes and businesses suffered without power thanks to that so-called “Bomb Cyclone/bombogenesis,” Phil took in a George Lopez show (!) at New Brunswick’s Stress Factory!

He was spotted by other audience members:

Wonder why @GovMurphy didn’t call a state of emergency…#WhereIsPhil https://t.co/z1tDCEJTdc

Two points for you to consider (which I shared with Bill Spadea this morning on NJ 101.5):

(1) George Lopez isn’t funny. I’d rather sit in traffic on 22 listening to elevator music than hear a single George Lopez joke. Sorry, but I know I’m not the only one thinking it! No offense intended to the good folks at the Stress Factory.

(2) Phil Murphy continues to openly and without shame express more care and concern more for non-New Jerseyans than actual New Jerseyans. Remember back in January? When he found time to rush to a church to defend illegal immigrants from ICE? But the Governor was yucking it up in a comedy club while thousands of his constituents suffered.

And before that, when he took his kids on a pre-planned Disney World trip sixteen months after he took office?

Tone deaf, no doubt, but lives weren’t on the line during New Jersey’s brief summer shutdown. No one was freezing when Chris Christie sat his butt in a beach chair…. #justsayin! And by the time of his Disney trip, his second-in-command Lt. Governor Guadagno was comfortable in her role and the entire administration was transitioned, battle-tested and experienced.

So if anyone sees our current Governor?

With 70,000 Northwestern New Jersey customers still without power as another winter storm approaches?

Tell’em Chris Christie was smart enough to wait until term number two before making it obvious that he didn’t give a damn. Phil still needs to get reelected in four years, and Save Jersey voters are famous for having long memories.