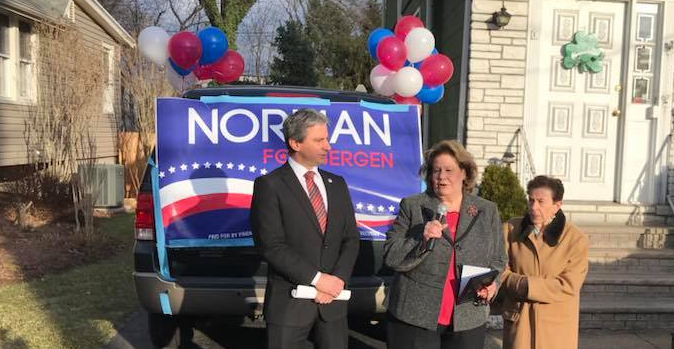 Standing in front of a crowd of around 150 (including many children), Bergenfield Mayor Norman Schmelz announced his bid for Bergen County Executive on Sunday.

Schmelz is a two-term Mayor of the heavily Democratic town where he grew up. His announcement took place at his mother’s home situated in front of commercial railroad tracks.

The scene could not have been any more different from the marble-encrusted kick-off of incumbent Jim Tedesco’s re-election attended by Bob Menendez and Phil Murphy. Schmelz had only a handful of elected and party officials.

This was a launch about people.

In his remarks, Schmelz lamented the rising cost of living in Bergen County, counting himself lucky to be able to have stayed here in the town he grew up. “We want people to know their tax dollars are going to government services,” Schmelz said to loud applause.

He called the $1 million settlement of a case involving county employees who alleged political retaliation in their termination as “money we will never get back,” arguing that the gravy train of the BCDC and Jim Tedesco has continued to run wild.

While an underdog at this point, the underdog position is exactly where the Republican challengers wants to be. Counted out in his first election and re-election, the tough and rigid hockey player (he had a game at 6:30 after the announcement) says he’s ready to take the fight to the Democrats this year.