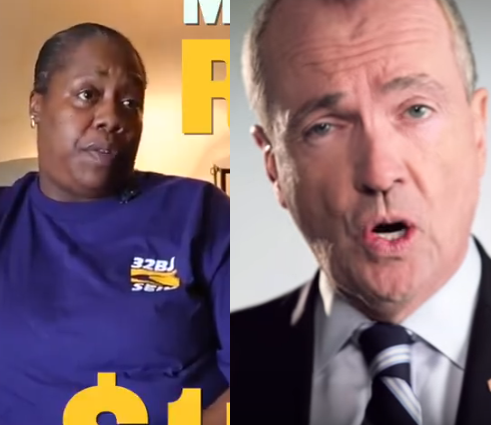 Nothing is sadder than watching far-Left loons like Phil Murphy talk hard-working people out of prosperity, Save Jerseyans.

Raising the minimum wage to $15/hour is not only good for workers – it's good for businesses and our entire state economy. pic.twitter.com/DsdnQJY3g6

The SEIU union worker in this video probably works around 133 hours per month based on the rate of pay she reports earning; she doesn’t specify whether her $1,500 per month is “net” or gross, so I’m assuming it’s likely gross. Divided by 4.3 weeks (the average amount of weeks in month), she’s apparently working just over 30 hours per week at Robbins Elementary School in Trenton’s heavily subsidized public school district where taxpayers subsidize $20k+ per K-12 pupil per year. How there’s not enough left over for the staff to earn better than $11.30 is beyond me!

But I digress. What’s more, public sector union workers are a relatively small percentage of the working population (16% in New Jersey).

To our larger point: the vast majority of minimum wage workers nationally and here in New Jersey are private sector employees, and 30 hours is barely full time. While 30 hours is generally considered the threshold for full time U.S. employment, adults employed on a full time basis work an average of 47 hours per week. So maybe — just maybe! — the problem here isn’t wages so much as the lack of REAL full-time employment in this state? And other blue states?

Getting minimum wage workers not unlike the one featured in Phil Murphy’s propaganda video a solid private sector job along with an extra 10 hours per week (?) could more than cover the PSEG bill which she references. She wouldn’t need to choose, as she says, between the electricity and filling the fridge.

We don’t need to deal in hypotheticals to prove my point. Consider the Seattle experiment, Save Jerseyans. That city elected to gradually increase its minimum wage to $15.00. The end result: “Low-wage workers on average now clock 9 percent fewer hours and earn $125 less each month than before the Pacific Northwest city set one of the highest minimum wages in the nation,” according to a widely-reported study conducted by the University of Washington. 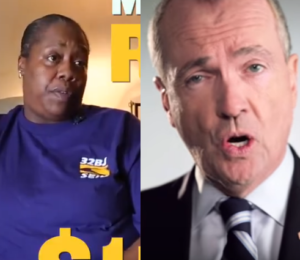 Most minimum wage jobs don’t produce $15 or even $10 in economic benefit to the employers who utilize low-skill labor. If a local restaurant has to pay $15 per hour to someone to flip a burger? Or mop the floors? They’re going to still need those services, sure, but they’re going to INCREASE their profit margins by (1) raising prices and (2) cutting shifts.

I’d much rather earn $452 ($11.30 x 40 hours) than $375 ($15.00 x 25 hours). Wouldn’t you? Unfortunately, the average minimum wage worker in Seattle lost $125.00 per month from his or her respective paychecks. High minimum wages invariably create a lose-lose economic situation for everyone involved.

This is simple, basic math. It’s not up for debate.

If you want to increase wages? Cut the cost of doing business; recent federal tax reforms have led to a spike in large corporations (which employ thousands of Americans a piece) hiking wages significantly, some to $15 per hour for lower-skilled workers.

If you want to increase under-employment and poverty? Listen to Phil Murphy and you can work a low-paying job, for the state, collect your government cheese, and struggle to feed your family for next thirty years all to fulfill some asshole politician’s subjective vision of “fairness.”

How are we even still debating this?