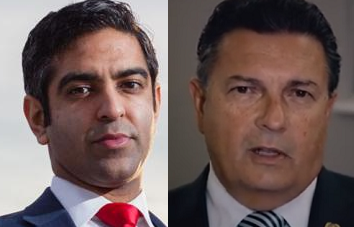 STAFFORD TWP., N.J. —  With two weeks to go in the race to succeed Frank LoBiondo as NJ-2’s Republican nominee, competitors Hirsh Singh and Sam Fiocchi are working to lock up local endorsements in the hopes of gaining a GOTV edge in the presumably low-turnout contest.

“Having an ally in Congress like Hirsh will greatly help Stafford Township,” Mayor Spodofora said. “On the local level, my team and I plan on cutting taxes, reducing local debt, keeping our neighborhoods safe, expanding recreation and parks, investing in infrastructure, and much more.  With Hirsh representing us, we know that he will fight to bring back more federal support to our region.  It will be a win-win for our residents and our township.”

At the other end of the district in Gloucester County, Fiocchi — a former Assemblyman from neighboring Cumberland County — locked up the endorsement of Franklin Township’s Republican organization.

“I’m thankful for the endorsement from the Franklin Township Republicans,” Fiocchi said. “I have many friends in the area going back to my days in the farm supply business, it’s great to have the support of old friends and the new ones I’ll make going forward through the campaign for the general election.”

Singh holds an undeniable advantage in the race; he has “the line” in multiple counties including vote rich Atlantic and he’s the only candidate with any significant cash on hand. Still, Fiocchi is a former elected official with some name recognition through the district’s LD1 region, and the Fiocchi campaign has repeatedly hammered Singh in recent days on a variety of hyper-personal issues including whether the front runner is living up to hyped fundraising expectations.