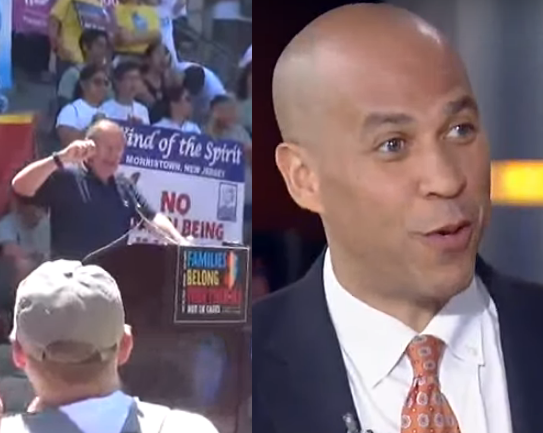 What’s less clear is how willing they are to be honest about it particularly as Democrat foot soldiers and congressmen alike begin ramping up calls for the dismantling of U.S. Immigration and Customs Enforcement (ICE).

For example, on Saturday, the severely-admonished Bob Menendez — who’s up for reelection this year — addressed a crowd of amnesty activists who greeted his remarks with a raucous “ABOLISH ICE” chant which the Senator did nothing to counteract:

Republican U.S. Senate nominee Bob Hugin has staked out a contrast between himself and the Garden State’s senior senator.

“It’s a shame that our public servants at ICE need to issue press releases telling elected officials, like Phil Murphy and Bob Menendez, to knock off the politics and let them do their jobs. Locking up and domestic abusers and violent criminals should never be a partisan issue,” said Hugin back in April. “Here is the bottom line: I support a clear path to citizenship for Dreamers—innocent young people brought here illegally by their parents who are now leading productive lives—and a similarly clear path to jail or deportation for criminal illegals who are putting our communities and families at risk. I am calling on Governor Murphy and Senator Menendez to join me today, pledge their support to ICE, and abandon their reckless Sanctuary State plan that will make New Jersey less safe.”

Menendez’s fellow New Jerseyan in the U.S. Senate (a guy with presidential aspirations) is taking a somewhat more cautious approach to the issue.