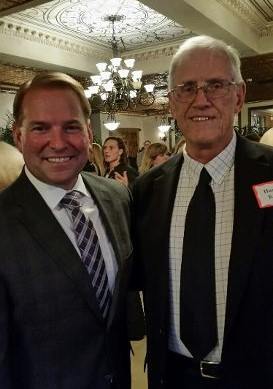 RED BANK, N.J. — Republican leaders and a healthy chunk of the NJGOP’s active membership gathered in Red Bank on Tuesday evening to honor Kim Guadagno as their ‘woman of the year.’

“I’m encouraged by the more than 250 attendees who turned out last night at our NJGOP fundraiser honoring Kim Guadagno as the ‘Woman of the Year,'” opined Doug Steinhardt, the state committee chairman. “I appreciate the many supporters who picked a hot August night to invest in our commitment to restore common sense and fiscal accountability to NJ government. With our new team, we are building tremendous momentum in New Jersey and are on track to vote out corrupt Senator Bob Menendez and stop Nancy Pelosi from taking over our Congressional delegation.”

Bob Hugin (Menendez’s challenger) was obviously the center of attention outside of Guadagno herself who, according to multiple attendees, sounded more than a little like a potential 2021 challenger to Phil Murphy.

Guadagno, who lost in a landslide to Murphy in November 2017, regaled attendees with stories of post-gubernatorial race interactions with voters expressing regret over Guadagno’s loss or, more intriguingly, their decisions to not vote for her. Buyers’ regret?

Guadagno has since taken a law firm post, but she’d have competition should she reenter electoral politics.

Also in attendance and working the room were state Senator Tom Kean Jr., Monmouth Sheriff Shaun Golden, and former Assemblyman and Guadagno primary rival Jack Ciattarelli, all of whom are said to be interested in the race and, in the case of Ciattarelli, already declared.