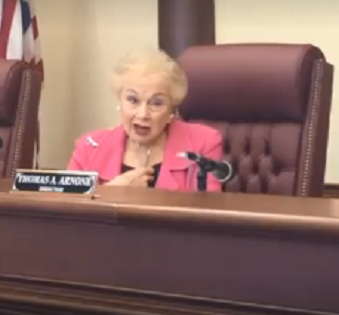 FREEHOLD, N.J. — The battle between Monmouth County’s all-Republican freeholder board and one of its members — Freeholder John Curley — continues to rage ahead of a showdown in November.

Back in December, outlets reported that Curley was the subject of a sexual harassment investigation. On Thursday, seemingly as part of their ongoing effort to purge themselves of Curley’s presence, the Republican freeholders adopted a nonbinding resolution declaring that board members should not receive taxpayer-funded health insurance; Curley is reportedly the only member who does.

A new allegation also surfaced during the meeting. The video below, recorded last Thursday and shared by MoreMonmouthMusings, features Freeholder Lillian Burry explaining how Curley allegedly told her “I will get you” during a closed meeting in 2013.

Among the night’s conflicts included an argument between Curley and Freeholder Director Tom Arnone over the disclosure of details related to the sexual harassment investigation.

Curley is seeking reelection as an independent this year.