Italian dictator Benito Mussolini infamously perpetrated the myth that his fascist government had make the trains run on time.

It’d almost admire how ballsy this guy is if the situation wasn’t so serious. Amid a new wave of unexplained cancellations and epic delays snarling rail traffic throughout New Jersey this summer, the Governor (on vacation) tweeted a vague defense of his Administration’s handling of our commuter rail system:

Commuters learned that the Raritan Valley Line to New York would be shuttered and the Atlantic City Line would be suspended for not four days, or weeks, but four months.

Then, this Monday, no less than 17 trains running on 6 different NJ Transit lines were cancelled without explanation.

It’s part of a pattern.

“Seven months after Mr. Murphy took office, many regular riders of New Jersey Transit, the state-run network of trains and buses, have become increasingly irate over a rash of train cancellations this summer that has made the nation’s second-busiest commuter rail system even less reliable,” reported The New York Times on Friday, the same day at the A.C. and Raritan Valley line announcements.

“It’s really just a crapshoot on whether the train’s going to run on time,” one 27-year-old N.J. Transit rider told the NYT. “The past few months has really just been awful.” 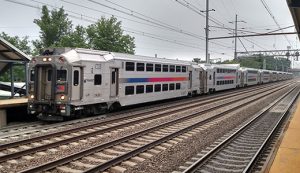 Murphy touted a new $242 million ‘investment’ in NJ Transit coming out of July’s budget battle. He’s also directed some rhetoric at bus service in recent weeks. Unclear as-of-yet is how the new monies — most of which seem earmarked for hiring new employees — will address a rail line problem that appears to go far deeper than a mere personnel shortage. Last summer, conductor ‘no shows’ caused highly-publicized cancellations, suggesting a union culture problem.

This is the same organization after all that paid $4.4 million for a 2-year lease on an empty floor.

“Where is the accountability here?” asked Assemblyman Anthony Bucco (R-Morris), a member of the Assembly Transportation Committee. “It is one excuse after another; and while the problems are getting worse Transit hasn’t explained how this mess is going to be fixed.  We need answers and we will request that the chairman of the Transportation Committee have Transit officials appear before the committee to provide them.”

The chairman and his fellow officials better have a better explanation than “Chris Christie.”

Another point that’s worth considering for committee members and ALL New Jersey commuters: how can a Governor who’s in bed with the public sector unions, and who thinks throwing money at problems is an acceptable solution to everything, ever change the culture at NJ Transit? Or any other level of state government and its extended network of quasi-government agencies and affiliates?