N.J. Legislator: Stop pretending this is about “social justice” and not weed money! 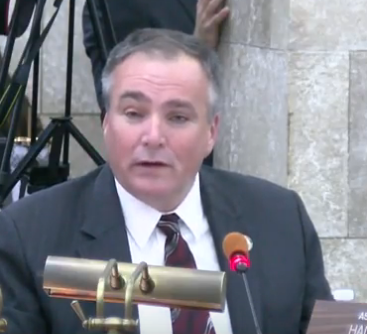 TRENTON, N.J. — New Jersey’s recreational weed legislation got out of the Senate’s and Assembly’s respective committees on Monday but not without plenty of dissent.

Among the dissenters was Assemblyman Hal Wirths (R-24), a former member of Chris Christie’s cabinet, who called out his colleagues for pretending that ‘social justice’ was the primary motivation for the legalization push.

“I gotta admit, some of the most education testimony was from the Weedman — and the Weedman (who I’ll call a salesman) — is telling you he’s not going to stop selling illegal products,” said Wirths. “ So I think we gotta – there was some comments that this will put an end to illegal sales. When someone’s sitting here in a room full of lawmakers, with state troopers, with sheriff’s officers, saying ‘it’s going to be a good day for me, I’m going to go out and sell more weed,’ I think we gotta be honest with ourselves coming from the source.”

Wirth was referring to the testimony of Ed Forchion, known as “N.J. Weedman.”

“We all know who’s getting the licenses, and it’s not people like me — who have sold marijuana. We’re not going anywhere, so what are you going to do with us,” Forchion told legislators. “I don’t want to get arrested again. I don’t want to go to jail again. But the day you pass this bill, I will be emboldened to sell marijuana (on the black market) — just like the white guys.”

Assemblyman Wirths also challenged Democrats to push Governor Murphy on the hypocrisy of calling legalization a ‘social justice’ issue while simultaneously demanding higher taxes on legalized weed. Some advocates have predicted one billion in revenues from legal weed sales while others insist the laws of economics — and the recent experiences of other states — give lawmakers cause to doubt rosy projections.