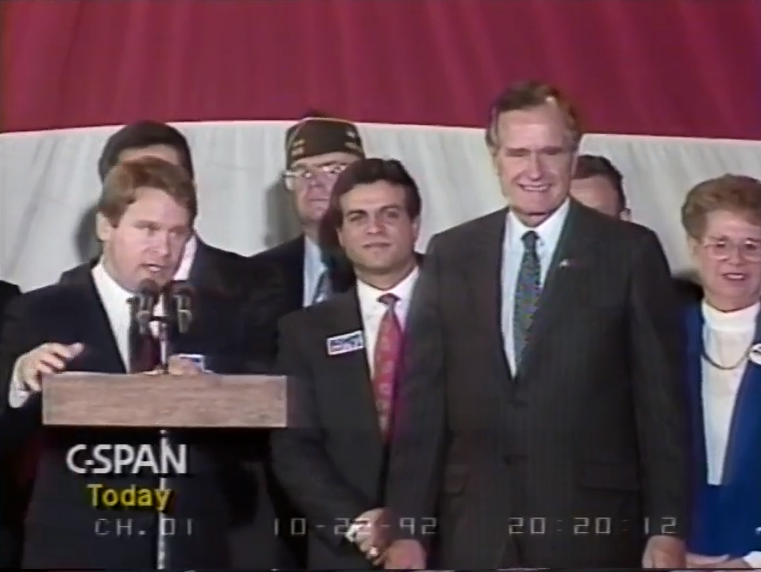 ROBBINSVILLE, N.J. — Over 26 years ago on October 22, 1992, George H. W. Bush arrived at Robbinsville Airport and rallied with Congressman Chris Smith for New Jersey’s then-15 electoral votes (we’re now down to 14).

Much has changed since that ’92 rally.

Smith (who at that time had already been in the House since 1981) will be New Jersey’s only remaining Republican federal official as of January 2019. There were six Republicans (including Smith) as of January 1993. Other members of the N.J. House delegation included Robert Torricelli and two new incoming freshman: Bob Menendez and Bob Franks.

Bush, of course, went on to lose to Bill Clinton in ’92 that November in a three-way race between himself, the future Democrat president, and independent Texas billionaire Ross Perot. The first Bush president had carried New Jersey in 1988. He lost it in 1992 (by a little more than 2 points) and no Republican presidential candidate has won here since ’88 (his son came the closest of anyone in 2004 when he lost the Garden State by 6.68 points). Until 1992? No Republican had lost New Jersey in 20 years.

Democrat Governor Jim Florio — who obviously wasn’t at the rally but whom Chris Smith attacked directly in his introductory remarks for raising taxes — would ultimately lose his reelection bid to Christine Todd Whitman in 1993, signaling the first wave of the Gingrich-led 1994 “Republican Revolution” which would flip control of the U.S. House of Representatives.

The Robbinsville Airport rally consequently presents a fun little time piece for any U.S. history nerd; it represents the pivot point between the Cold War era of U.S. politics and our modern age of political combat.

“Thank you, Chris. You know, every place I go, you see these signs that say ‘Clean House.’ If we had more congressmen like Chris Smith, we wouldn’t be saying ‘Clean House,'” said Bush. “And I want to salute not only Chris, but Governor Tom Kean. What a great job he did for this wonderful state.”