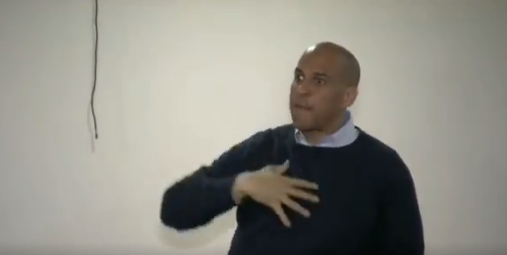 It’s hard to watch what’s happened to Cory Booker over the course of his public career.

He used to be a school choice supporting, relatively fiscally moderate anti-corruption Newark crusader. That was a decade ago.

Even as late as 2012? Before the Obama campaign made him flip-flop on camera, he actually DEFENDED venture capitalism!

Five years later? Cory Booker — you may know him as “Spartacus” or “Gropacus” — made a few headlines by comparing radical pro-abortion activists to the veterans of America’s D-Day landings. He wasn’t a New Jersey mayor anymore; he was a U.S. Senator with executive branch aspirations.

Today? Now a full-fledged Democrat presidential candidate, Cory is on the campaign trail equating Ocasio-Cortez’s positively loony “New Green Deal” to the defeat of the Nazis (and landing a man on the moon’s surface)…

Booker: Green New Deal effort is like fighting the Nazis & going to the moonhttps://t.co/cbWCMFwYVx pic.twitter.com/fBOLcksn6t

The substance of the Green Deal (which he, like others in his party, decided to embrace before they read it) is crazier than Booker’s insultingly stupid comparisons. Ending air travel, eliminating most cars and all planes, banning meat, gutting and retrofitting EVERY building in America… the list is too silly for a grade schooler.