We’ve heard and seen Cory Booker (D-Twitter) say and do a lot of dumb stuff in pursuit of the 2020 presidential nomination, Save Jerseyans, but this video MAY take the cake.

“We may not be called to storm beaches in Normandy,” Booker told anti-health care reform abortionistas this week (I believe this is from the so-called People’s Filibuster event), going on to explain that “today is our day” to fight for abortion…

Yup. He said it! The same guy who thinks he’s a hero for shoveling snow and completing a “food stamp” challenge. He really, truly thinks, or wants his base to believe he thinks, that NARAL hipsters and aging hippies fighting for the right to murder their young = young Americans storming beaches, and dying on those beaches, to liberate Europe from eugenicists.

Seeing is believing (but certainly not approving):

As if to try and out-stupid himself on the spot, a frothing-at-the-mouth Booker also cited Cesar Chavez (a Marxist) as an example for the anti-Trump Resistance.

Interestingly enough, you may recall that New Jersey’s junior senator has NOT yet commented on the N.J. Democrat operative who made national headlines by celebrating Rep. Steve Scalise’s shooting with a “huntrepublicans” hashtag. All of that peace-love-tweet nonsense he shares on Twitter is once again revealed to be an act. Nothing more, nothing less.

But it’s not just conservatives (like yours truly) who are getting wise to windbag’s nonsense, folks.

Check out the comments that far Left wingnuts posted on the video – we screen grabbed some of the funnier ones for your viewing pleasure: 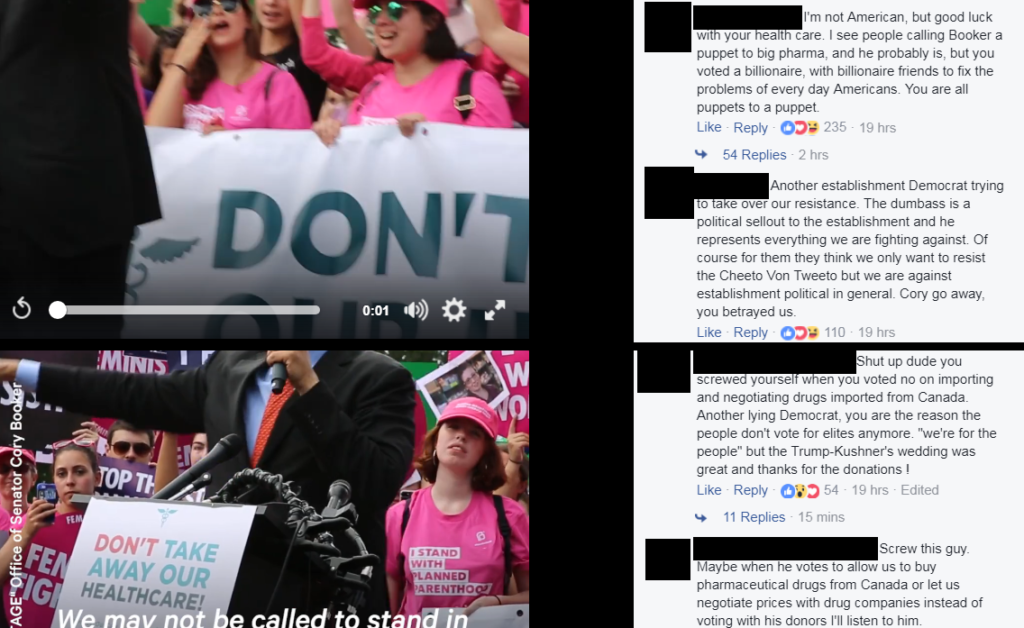 Leftists on social media, in significant numbers, criticizing Booker as an unrepentant hypocrite for talking like a Leftist populist while simultaneously getting into bed with Big Pharma.

They think the guy whose praising a Marxist and comparing abortionistas to WWII veterans is TOO FAR to the RIGHT for their appetites. One of them even picked up on our Booker-Kushner link story.

I guess being a Resistance fighter isn’t all fun and flowers???

Couldn’t make any of this up if I tried, Save Jerseyans!