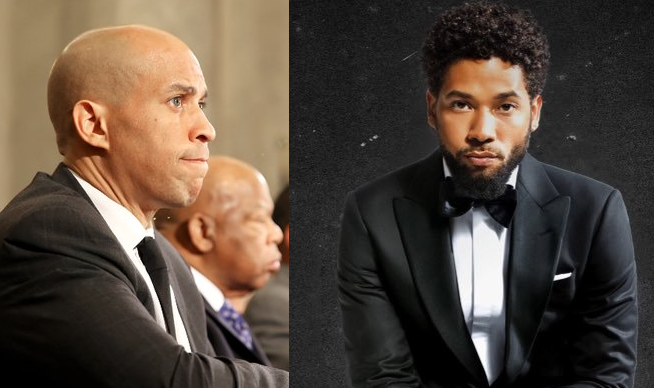 Cory Booker (D-Twitter) couldn’t wait to defend Jussie Smollett when the now-disgraced ‘Empire’ actor claimed to have been attacked by Trump supporters. Booker called it a “modern day lynching.”

In reality? True or not, it was a chance for New Jersey’s most famous demagogue grandstand and garner attention for himself; like we saw during his infamous Kavanaugh hearing performances, Booker doesn’t wait for facts when he thinks there is an opportunity to strut and something to be gained by pouring fuel on the fire of a sensitive situation.

Late last month, while on the presidential primary campaign trail, Booker refused to retract his prior comments and told reporters he wasn’t going to comment further on the story.

I won’t hold my breath, Save Jerseyans, but I’ll hope that SOME enterprising political beat reporters on the ground in Iowa, New Hampshire, or South Carolina press Booker on this point. He shouldn’t be allowed to walk away from the Smollett affair without having to make a statement to explain his lack of leadership and reckless rush to judgment, one we’ve seen from him on MORE than one occasion (see above).

And Kavanaugh was just ONE other example. Just the other day, Booker abruptly terminated a press conference when confronted about the rampant anti-Semitism of Rep. Ilhan Omar.

Unsurprisingly to those of us who’ve followed him for years, he’s not displaying the temperament one would expect from a future president. Even a Twitter-armed Trumpster exercise more restraint than Gropacus! A stunning and jarring ‘accomplishment’ in this ugly digital age of ours.

Booker is a coward. We can’t afford one of those in the White House. Not at this stage of our history.