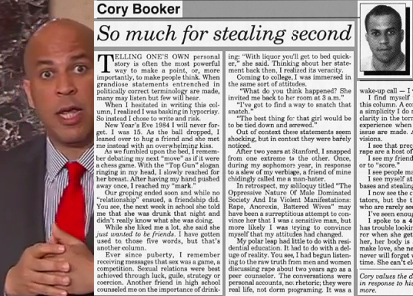 “As we fumbled upon the bed, I remember debating my next ‘move’ as if it were a chess game. With the ‘Top Gun’ slogan ringing in my head, I slowly reached for her breast. After having my hand pushed away once, I reached my ‘mark.'” 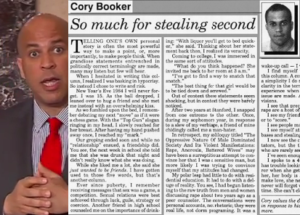 Long-time New Jersey political news consumers may recall how then-privileged student Cory Booker (D-Twitter), the future “Spartacus” leading the charge to stop Judge Kavanaugh’s confirmation to the U.S. Supreme Court, penned an eyebrow-raising column for the Stanford Daily in which he admitted to groping his friend (even after she resisted him) when he was just 15 years old.

You can read the complete column here. It came up back during his 2013 run but didn’t get much mainstream attention (surprise surprise).

In the column, Booker seemed to prioritize sounding poetic over appearing apologetic while recounting his actions.

“Telling one’s own personal story is often the most powerful way to make a point, or, more importantly, to make people think,” wrote Booker in his February 19, 1992 column; the column’s headline: “So Much for Stealing Second.”

“When grandiose statements entrenched in politically correct terminology are made, many may listen but few will hear,” Booker added. “When I hesitated in writing this column, I realized I was basking in hypocrisy. So instead I chose to write and risk.”

Booker is now a U.S. Senator, a high elected official, grilling and maligning U.S. Supreme Court nominee Brett Kavanaugh for what the judge allegedly did at age 17 to a 15 year old girl:

The Senate must not repeat the mistakes it made when Anita Hill bravely came forward with her experience of sexual harassment: https://t.co/u9Ai7Wj5as

The Judge reportedly denies ever pinning down Professor Ford and tried to remove her bathing suit as a teenager, or at any other time. We’re supposed to hear from both of them next week.

The Senator obviously does not deny his own teenage behavior (he wrote about it openly, after all) which, arguably, went further than what Kavanaugh allegedly did at a high school party approximately 35 years ago.

Not that that’s the point. What is:

Who should be questioning whom here? And where the hell does Cory Booker get off lecturing anyone about the ugly behavior of teenage boys?