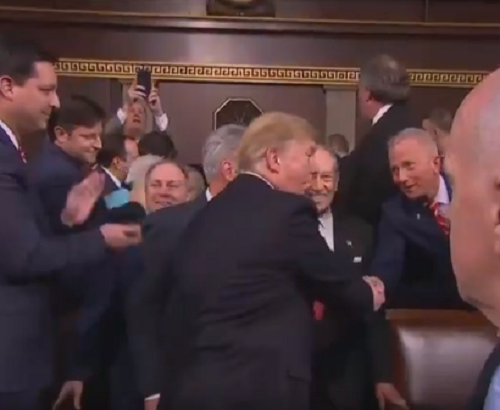 WASHINGTON, D.C. – Jeff Van Drew (D, NJ-02) is working hard to at least appear less crazy than the rest of the House Democrat caucus. On Friday morning, he dropped by Fox News’s America’s Newsroom to discuss Donald Trump’s renewed border wall push. A freshman congressman, Van Drew won a close race against an underfunded opponent last year in a district carried by Donald Trump in 2016 and remains a top NRCC target for 2020.

Van Drew stopped short of calling for far-left Congressman Adam Schiff’s resignation, however, even as the radical Democrat committee chairman continues his endless investigations into the Republican administration despite the Mueller Report found no evidence of collusion between President Trump and Russia.

Here’s the relevant portion of the transcript:

BANDERAS: “…Schiff. Do you believe he is in the he pressed an agenda for two years without getting the facts. The facts are now out. Should he resign and step down? “

VAN DREW: “That’s not for me to say. The voters in his district will make a decision.”

BANDERAS: “Do you agree with anything the president said?”

VAN DREW: “What I would like to see and hopefully the president would like to see and there really are some like-minded Democrats who would like to see as well for us to stop asking for impeachment of the president, to stop asking for all this name calling back and forth. I keep emphasizing that we have work to do. We’re not talking about social security and medicare and what’s going on in the mideast and a host of other issues. Every day it is this. Let me tell you something, I get in my district a lot and on the street a lot. You know what people are least interested in by and large? This stuff.”