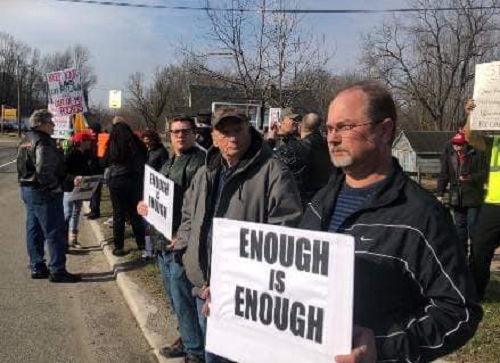 FRANKLIN, N.J. – Phil Murphy dropped in on the Sussex County Democrat organization this Saturday, gathered at the Irish Cottage Inn in Franklin for their annual convention.

The New Jersey Herald reported about 100 in attendance. Anti-Murphy protesters – who were out in force that morning to express their disapproval of their radical ‘social justice’ governor – say that’s not an accurate head county.

“[T]here was no way [there were] a 100 in there,” Skylands Tea Party President Bill Hayden opined on Facebook, referring to the Herald article.

“100? Irish cottage inn did NOT have that many people inside it lol,” complained a commenter on the Herald‘s website. “NO one likes Murphy except illegals.”

The Herald pegged the protesters’ number at 40-50.

Some attendees say that’s low, and they point out that the event was moved from its original location with relatively short notice, a decision they say was designed to limit the number of protesters on site.

Head counts aside, Sussex is one of the state’s most Republican counties; Murphy earned only 36.3% of the vote there in 2017 despite winning a double-digit state-wide victory. However, recent polling suggests the Democrat Governor’s approval rating is dipping state-wide, and he’s now trailing Chris Christie and Jon Corzine at this point in their respective gubernatorial tenures.