Sherrill could decide to support impeachment after Mueller testifies 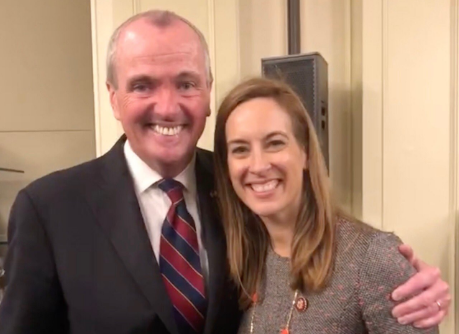 WASHINGTON, D.C. – Robert Mueller will testify before not one but two House committees this summer as Democrats desperately labor to keep the Russia election interference story line in the news.

One New Jersey Democrat Congresswoman is indicating that Mueller’s testimony could push her towards supporting President Trump’s impeachment.

One Wednesday morning, freshman Rep. Mikie Sherrill (D, NJ-11) joined CNN’s John Berman to discuss immigration but also Mueller’s pending trip to Capitol Hill. She told the host that she’ll closely listen for what Mueller has to say (to date, Sherrill has not joined other N.J. Democrat including Tom Malinowski in support impeachment proceedings:

BERMAN: I woke up to the news also Robert Mueller is going to testify before the House Judiciary Committee and Intelligence Committees. What do you want to see him answer?

SHERRILL: You know, as I’ve said for weeks now i want a further understanding of the investigation. I want to know just what it is he did not go into his report. Are all the pieces of the investigation he did not get to, did they all go into the district of New York or the Southern District of New York, are there more investigations that need to happen? Why didn’t he interview certain people, and if he had been able to talk to other members of the administration, are there holes in his report? Are there holes in his summary he would have liked to fill in these interviews?

BERMAN: You’re looking at all this through a prosecutor’s lens. Up until this point you have not been calling yet for an impeachment inquiry, is that correct?

SHERRILL: That is correct.

BERMAN: That could come from this testimony on July 17 that might change your mind?

SHERRILL: I think that’s why I’ve been calling for Mueller to testify for so long now just because we have got to have a greater understanding of the report, a greater understanding of his investigation. The more you understand any sort of investigation and the people that were involved and the possible venues and the possible avenues for wrongdoing, the better you are when you make those decisions, when you make a decision in the federal case whether or not to charge, in this case whether or not not to impeach. And I still think Congress is getting more and more information in.

BERMAN: Are you closer than you were calling for an impeachment inquiry?

SHERRILL: I certainly want to hear what Mueller has to say, I’ve been holding hearings as well into how we protect our election system.