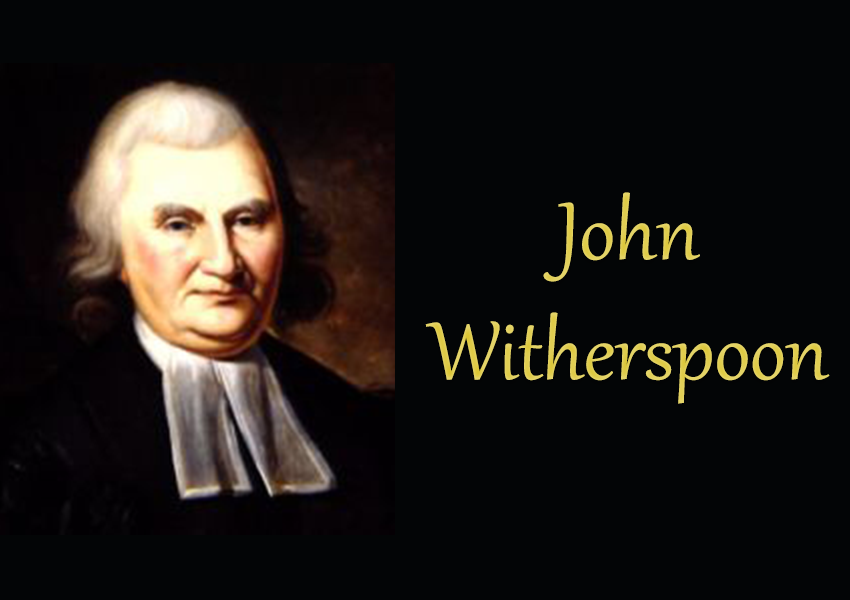 Our Independence Day-inspired effort to honor each of New Jersey’s five signatories to the Declaration of Independence continues, Save Jerseyans. We’ve already gotten to know Abraham Clark and John Hart.

Witherspoon wasn’t born in the United States. Scottish by birth, Witherspoon had a strong religious and academic background steeped in the Protestant faith; at one point, during the Catholic Jacobite victory at the Battle of Falkirk, Witherspoon was imprisoned in a castle due to his public Protestant sympathies. He later became a minister. Reverend Witherspoon emigrated to the American Colonies in 1768 at the invitation of future fellow founding fathers Benjamin Rush of Pennsylvania and Richard Stockton of New Jersey (whom he previously met in Scotland) to serve as president of the College of New Jersey in Princeton – the future Princeton University. He personally spearheaded and put his own money into the reconstruction of Nassau Hall after it was badly damaged during the Revolution.

His contributions to theological and general academic learning at Princeton could fill a post (or several), but it suffices to say that Witherspoon’s crowning achievement was helping transform the small theological school from a boot camp for Protestant clergy to a world class institution of classical learning which prepared many of the founding generation’s leading members for their future duties including none other than James Madison and Aaron Burr. Witherspoon was a traditionalist but also very much a product of the Scottish Enlightenment. He encouraged students to consider even those thinkers like David Hume whom Witherspoon considered flawed, wrong, or in Hume’s case, an “infidel.”

As the 1770s progressed, Witherspoon feared not just the growing power of the Crown but also government interference in religion (granting power to Crown-appointed authorities over religious matters) which revived ill memories of his experiences in Scotland and which he also believed threatened American liberty and autonomy in his adopted country.

So Witherspoon once again got political in his own right. Long before Billy Graham, Witherspoon was America’s sermonizer-in-chief. Witherspoon was appointed Congressional Chaplain by Continental Congress President John Hancock after being tapped for the New Jersey delegation. He joined the Committee of Correspondence and Safety in 1774 before the war began in earnest and, in 1776, he delivered a famous sermon titled “The Dominion of Providence over the Passions of Men” that was widely circulated and credited as being one of the more influential public arguments for separation from Great Britain:

“You shall not, my brethren, hear from me in the pulpit, what you have never heard from me in conversation, I mean railing at the king personally, or even his ministers and the parliament, and people of Britain, as so many barbarous savages. Many of their actions have probably been worse than their intentions. That they should desire unlimited dominion, if they can obtain or preserve it, is neither new nor wonderful. I do not refuse submission to their unjust claims, because they are corrupt or profligate, although probably many of them are so, but because they are men, and therefore liable to all the selfish bias inseparable from human nature. I call this claim unjust, of making laws to bind us in all cases whatsoever, because they are separated from us, independent of us, and have an interest in opposing us.”

He ultimately signed the Declaration of Independence, passionately  arguing that the country “was not only ripe for the measure, but in danger of rotting for the want of it.”

Though well beyond fighting age himself, Witherspoon’s son served as a major in the Continental Army. Witherspoon took the extraordinary step of closing the College of New Jersey as the war came to Princeton’s doorstep to protect the campus and its students and faculty.

Witherspoon served on no less than 100 committees between 1777 and 1784 and later helped draft the ill-fated Articles of Confederation. He also served in the New Jersey Legislature and, notwithstanding his early affiliation with the Articles, he strongly and vocally argued for the ratification of the U.S. Constitution in which his former student James Madison played an starring role.

It’s fair to say that Madison’s Federalist Papers contributions were heavily influenced by Witherspoon’s lessons about human nature. In that sense, Americans owe Witherspoon a debt of gratitude for planting seeds which ultimately took root and bore fruit!

Blind and in failing health, Witherspoon passed away  on November 15, 1794 on his farm (called Tusculum) located right outside of town. Witherspoon isn’t buried on the farm but on “Presidents Row” in the historic Princeton Cemetery. There are several things named in his honor on both sides of the Atlantic. A statue of Witherspoon stands at the University of the West of Scotland, Paisley in Scotland (where he met John Stockton), and there’s another statue near Dupont Circle in Washington, D.C.