Up Close Images and Memories of September 11th | Meissner 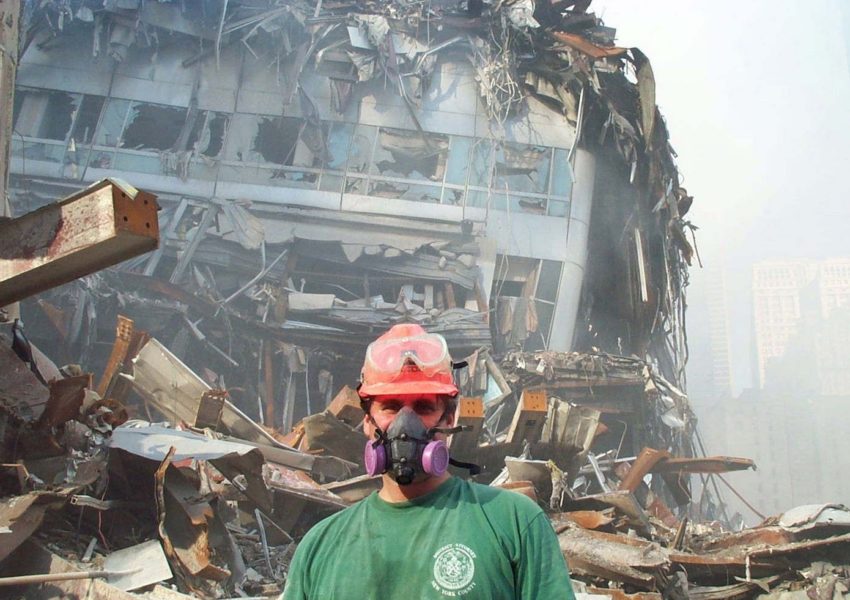 Eighteen years ago today I recall living in West New York NJ in a community on the Hudson River known as Jacobs Ferry. I remember standing at the ferry docks on the N.J. side watching as the World Trade Center towers first were on fire and then one by one collapsing before my very eyes. It was surreal to watch. We were then told that the ferries to New York were cancelled and I remember quickly driving home and listening on the radio about the attack on the Pentagon. When I got home grabbed my camera and started to take pictures of what I was observing because I felt the need to document this horrible day knowing so many lives were being lost.

For days following 9/11 there was a never ending dust cloud over lower Manhattan that could be seen from where I lived. That weekend I determined that I would volunteer to help with the recovery effort and see how I could help in any way, so I took the ferry across the river and proceeded to walk all the way downtown along the West Side Highway which was closed and filled with all sorts of military vehicles, helicopters and soldiers. Again I found the experience walking down a desolate West Side Highway in the morning of a Saturday to be surreal like out of a movie but it was real. As got closer to downtown I came across papers on the ground which upon examination I realized came from the towers as they were documents of Morgan Stanley which I knew had offices in the tower and remember thinking that came from someone’s desk inside the tower who may have died simply going to work.

Upon arrival downtown, I sought out how I could help and was given a mask, a hardhat and a pair of gloves all donated by businesses. There were a mix of First Responder firemen, police officers, all sorts of State Troopers from all over the country including New Jersey, and even FBI agents, along with civilian volunteers like myself helping. I remember volunteer masseuses, therapists, doctors, nurses, etc. all set up near Battery Park City to assist all the volunteers when they took breaks. I remember being amazed by the unity and togetherness of these complete strangers which I have never witnessed before in my life and never did again since.  I then remember seeing a broken cell phone on the ground thinking should I take this and somehow try to find the owner’s family as this could be the only thing that family will have of their loved one.  I then distinctly remember hearing very loud whistles all over the debris field and learned that the whistles were devices which went off when firemen weren’t moving so as to assist in others finding them. There must have been hundreds of whistles constantly going off.

I then noticed a line of volunteers and first responders setting up on the pile about 200 yards into the debris field which is now where the memorial is. I determined to join them and proceeded to go to the very top of the line and was given a bucket which I started to fill with debris and then would pass on the bucket to the next person who would then hand it off down the line. This was how we were clearing debris in order to try to find survivors as at the time they did not want to use anything mechanical out of fear of injuring or killing any survivors. I remember looking at the tangled metal and being unable to decipher what I was looking at other than I remember seeing hard drives from computers which turned to dust. I still remember my work boots burning from the smoldering metal and the site of cadaver dogs searching for victims around me. 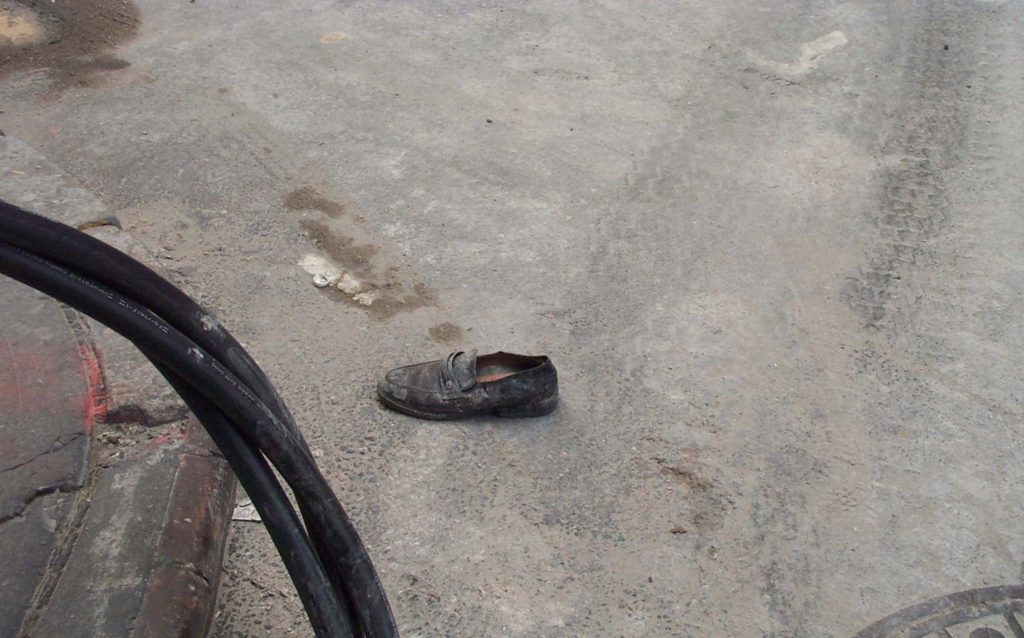 I still remember seeing crushed fire trucks like they were toys. I have so many memories of my day at Ground Zero I could go on and on. I tried to document what I could in the pictures I took as I knew this was a day that will change America forever and that it is was a day that I did not want my kids to ever forget and could think of no better way of doing that than by taking the pictures I took. By taking pictures I thought it would help prevent it from ever happening again as no one will ever say it never happened.  That was why I took the photo of the shoe I saw on the ground, likely of someone who fled in terror on that day. Similarly, it was why I took the photo of the side of the Burger King next to where the Towers stood which was next to the makeshift morgue as someone spray painted in big red letters “Morgue” with an arrow so that responders knew where to bring any remains that were found. Again that entire day was surreal.

Finally I remember departing for that day in a police vehicle and the many Americans standing along the West Side Highway all the way back up to the ferry terminal waving flags and thanking the recovery workers. I remember the feeling of unity I felt in seeing all these people coming out in unison providing a morale boost to the first responders and volunteers who just spent a day seeing hell on earth. Finally I recall all the posters around the city from families of the victims desperate for information about their loved ones and reading all the so very sad stories of mothers, fathers, sisters, brothers, and children suddenly lost in the tragedy. It was all so very sad only made worse by my personal loss of a great friend of mine Jeffery Nussbaum who worked on Wall Street at Carr Futures in one of the Towers and  who died that day before he could even marry or have the pleasure of having children and see them grow.

All of these memories came flooding back when I learned I got cancer three years ago from my work at Ground Zero and went through surgery and intensive chemotherapy, having to watch my young children of 13 and 15 worry that they may lose their father joining me, with tears in their eyes when I would receive hours of chemotherapy day after day. While I have fortunately now fully recovered, I still worry about what may pop up next as a result, as no doubt my fellow volunteers and first responders also do. However, I have absolutely no regrets and would volunteer all over again, as the experience has helped guide my life ever since, placing life itself, and how fragile it really is, in perspective.

Those are some of my memories of that day 18 years ago, which has transformed my life to this day.