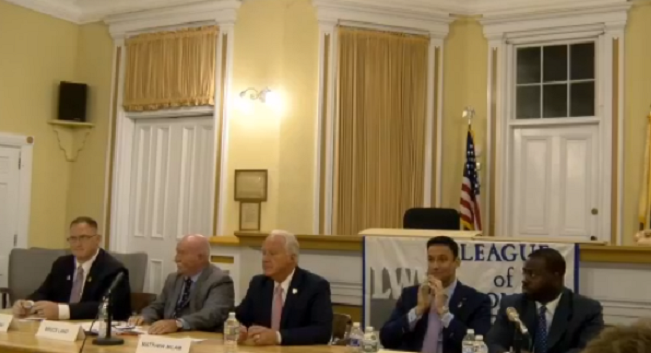 CAPE MAY COURT HOUSE, N.J. – It wasn’t much of a contest on Monday night at the historic Cape May Court House building when all six combatants in the First Legislative District contest locked horns. It’s this fall’s mostly competitive state-level race and the contentious tone present from the debate’s onset made that clear.

“I’d like to thank my opponent for finally agreeing to a debate,” said Mike Testa, the Republican nominee for State Senate. “This election is about Phil Murphy. He [State Senator Bob Andrzejczak] votes for Phil Murphy’s radical agenda 95% of the time. Bob Andrzejczak claims to be independent., But many of you have received mailers from the General Majority PAC. That’s exactly the boss that Bob Andrzejczak answers to.”

Andrzejczak’s effort to draw a winning contrast between himself and Testa fell flat; notably, the incumbent Democrat went all-in on climate change in a district carried by Donald Trump in 2016.

“There is no doubt it’s happening. You’re seeing sea level rise now,” said Andrzejczak. “There is climate change happening in the world. So what do we do about that in New Jersey? Move away from fossil fuels, but at the same time we have been working with the DEP and the U.S. Army Corp of Engineers.”

One of Andrzejczak’s two running mates – Assemblymen Matt Milam – further muddied the waters by appearing to endorse a ‘pathway to citizenship’ for illegal aliens notwithstanding the Democrat ticket’s insistence that they’re not pro-sanctuary state.

“I believe in the same way as I believe in our church’s motto is ‘open doors, open hearts, open minds,’ and that’s how we should be in this state,” Milam decalred. “Let’s help anyone that wants to come and be a United States citizen. Let’s help them because everyone works hard. Let’s help them get them get their citizenship and be good tax-paying citizens, as we all are.”

LD1 encompasses all of Cape May County, most of Cumberland County (including Vineland and Millville) as well as part of Atlantic County. With the exception of former Assemblyman Sam Fiocchi who briefly held his office from 2014 to 2016, a Republican hasn’t represented the lean-red district since January 2008.