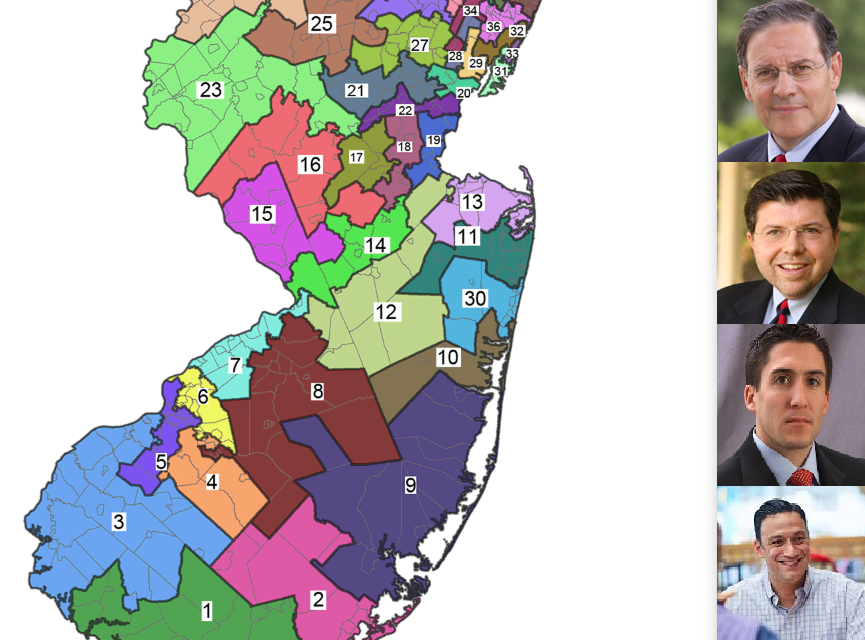 We’re one week from another election day, Save Jerseyans, and with Assembly contests topping the ballot across New Jersey, it’s fair to assume that turnout will be light. Very light. Distressingly light, in fact, given the scope of our state’s problems and the legislature’s ongoing role in precipitating those problems.

Where do the state’s top contests stand?

My guesses are educated guesses. When the turnout is as low as it’s likely to be this year? Roll the dice. Remember: less than 22% of registered voters participated in 2015, the last year we didn’t have a statewide race atop the ballot to generate general interest. You might see a bit of an uptick this time since partisan fervor is running a bit hot. TBD.

With all of that being said, the likely outcome state-wide right now after the dust settles is somewhere between R+2 to D+6 in the General Assembly. Only four districts – LD1, LD8, LD21, and LD25 – are considered truly competitive and likely to switch control this year. A six seat loss would drop Republicans to a mere 20 seats in the 80-seat lower chamber of the N.J. state legislature; it’s a complete swing from three decades ago (1991) when Republicans had 58 seats to the Democrats’ 22. A net gain of two would pump them up to 28 seats and, hopefully, possibly laying the groundwork for an expanded map in 2021 when Phil Murphy is on the ballot. 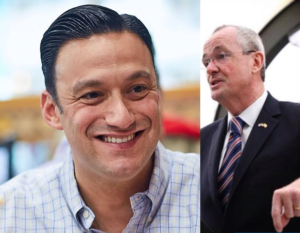 This cycle’s main event: Cumberland GOP Chairman Mike Testa Jr. is trying to take down Democrat State Senator Bob Andrzejczak in a State Senate contest catalyzed by Jeff Van Drew’s 2018 election to Congress. He’s run an unapologetically conservative campaign against Sanctuary Statehood and the Murphy Administration’s other central policies. Republicans believe they can pick up two Assembly seats as well with local Cape May County elected officials Antwan McClellan and Erik Simonsen. This district – a mix of Jersey Shore communities, working class white suburbs and increasingly-Hispanic farm communities – voted for Donald Trump in 2016 and is a rare N.J. swing district where Republicans still boast a slight registration edge. The Democrat money advantage is HUGE but their VBM advantage is a mere 38 ballots. If the NJGOP can’t figure out how to win in LD1? They might as well hang it up until political conditions improve at 30,000 feet.

Is Chris Brown the next South Jersey GOP powerbroker? Or Diane Allen II? He’s working to get Freeholder John Risley Jr. and former Brigantine Beach Mayor Philip Guenther across the finish line this November but the race has flown under the radar throughout the fall season. The Republican ticket is operating on a shoestring budget and, in truth, isn’t benefiting from the cash shortage engendered by the high number of GOP defense priorities (in LD8, LD21 and LD25). There’s limited cash to ‘expand the map.’ Unlike most other districts? The issues are hyper-local: Atlantic City and PILOT. Democrat incumbent Vince Mazzeo got his clock cleaned for State Senate by Brown yet his name recognition (from years in public office and a family business) seem to give him a stubborn edge.

The 3rd Legislative District is frustrating. It’s one of two legislative districts in the state (along with LD1) which voted for Donald Trump but which is currently represented in Trenton by Democrats. Incumbents John Burzichelli and Adam Taliaferro don’t have Steve Sweeney atop the ticket this November, but the Senate President only expanded his margin in 2017 after the NJEA spent millions to retire him. Republican challengers Edward R. Durr and Beth Sawyer are working hard to take advantage of a Sweeney-less ticket this November. Given the fact that this rural, “working class” Southern New Jersey district is actually red? We can never rule out a pleasant surprise.

Second only to LD1 on the GOP priorities list (and probably number two on the Democrats’ list, too, after LD21) is the 8th Legislative District. The once-mighty Layton Burlington organization is no more. The county is no longer purple; it’s definitely blue-tinged. And LD8 – which also includes a small slice of Camden and Atlantic counties – is not Trump country. Sprawling suburbs like Evesham Township saw among the most dramatic swings from red-to-blue in 2018. That’s the sobering news. The good news: the GOP ticket of Navy SEAL Ryan Peters and former Sheriff Jean Stanfield is strong and well-known. The Democrat ticket is led by a lobbyist who is in trouble with the unions which form the bedrock of the South Jersey Democrat GOTV machine. Despite a super-abundance of resources, the Dems have only managed to amass a 278 vote-by-mail lead (they usually do a lot better south of Trenton when they try). A double Republican hold in this district would be a real coup and a much-needed shot-in-the-arm for the Burlington GOP.

The Republican challengers Michael Amoroso and Matthew Woolley nabbed an endorsement from the Asbury Park Press. Sadly for the GOP ticket in this instance, newspaper endorsements mean little in 2019 and they’re far behind in the money game; state Senator and former Monmouth County Democrat Chairman Vin Gopal is a prolific fundraiser and he’s rubbed off on his district’s Democrat Party. This district should and could be competitive, and I wouldn’t be surprised to see Republicans out-run expectations here on Election Night. My guess is that it’ll be a two-or-more cycle reconquest.

It wasn’t all too long ago that the 16th Legislative District, which includes Princeton, was 100% represented by Republicans. Now only moderate Republican State Senator Kip Bateman is left. He’s not up this year, but incumbent Democrats Roy Freiman and Andrew Zwicker are favored to fend off Republican challengers Mark Caliguire and Christine Madrid (one early indicator is a sizable 1,128 vote-by-mail lead for the Democrat ticket). The suburbs here are prime examples of the Trumpian era realignment that has reshaped national politics and made it extremely hard for New Jersey Republicans to play in districts that were very competitive as recently as during the Christie Administration.

There was a time when NJGOP politics was governed by the powerful ‘Westfield clique.’ Times are changing. Nancy Munoz (R-21) edged past the top Democrat votegetter in 2017 by 1,554 votes. Jon Bramnick – the GOP Assembly minority leader – was only 1,010 votes ahead of her. The district has only grown more blue since then (there are barely any GOP primary voters left in the Union County portion of the district), and Democrats already have a 911 early vote lead as of this writing. There’s also a third ticket this time around – Martin Marks and Harris Pappas, running as independent conservatives – who are very open about their candidacies being designed to retire Bramnick and Munoz. Marks and Pappas say the pair has done a poor job of leading the state party in the Assembly; they’re at peace with playing a spoiler role. Bramnick and Munoz are running largely separate efforts, and the messaging is the antithesis of the LD1 GOP’s ‘bold colors’ approach (e.g. Bramnick sent a mailer to Democrats touting his ‘F’ NRA rating). Would I be shocked if Bramnick pulled it out? No. Munoz? A little. Ultimately: the odds are stacking up against Republicans in the 21st, and Bramnick only survived by a little more than 2,500 votes last time around. They probably need a lot of luck this time around.

State Senator Anthony Bucco survived in 2017 by a modest 2,430 votes. He was an Assemblyman then; today, he’s succeeded his father in the state senate but, due to some tactical and procedural magic, he’s still running for Assembly on November 5th. Will voters reject the arrangement? The Democrat slate here is far, far left. Morris County is also trending blue. Another winkle: an open seat since Michael Patrick Carroll (R-25) declined to seek reelection to the Assembly; Bucco running mate Brian Bergen hopes to step in. Lots of uncertainty. Could be a late night.

Paramus Councilman Chris Di Piazza and Rochelle Park Mayor Michael Kazimir are hard-charing millennial men of the future. They’ve also gone up on television. Unfortunately, the Bergen County-dominated 38th Legislative District isn’t immune to the GOP’s systemic suburban problems despite the presence of a few burbs which went from Obama to Trump from 2012 to 2016, and the local county Republican organization is still a notorious hot mess. With more money and a real organization behind them? This might’ve been a real race and the Di Piazza-Kazimir team might still surprise the pundits with a strong finish. Here’s hoping they stay in the game either way, maybe again in 2021?

Incumbents Holly Schepisi and Bob Auth are weathering a ‘dark money’ assault from NJ United, a group with ties to Democrat Assembly Speaker Craig Coughlin. NJ United has purchased $100,000 worth of air time in 39th Legislative District but, at the end of the day, that likely has more to do with (1) internal Democrat politics and (2) a super-abundance of cash than an actual perceived opportunity to flip LD39 this cycle. Still, don’t be shocked if the race is a bit tighter than in past years. The once-rock solid red suburbs of Northern Bergen are undeniably realigning with Trump at the helm.