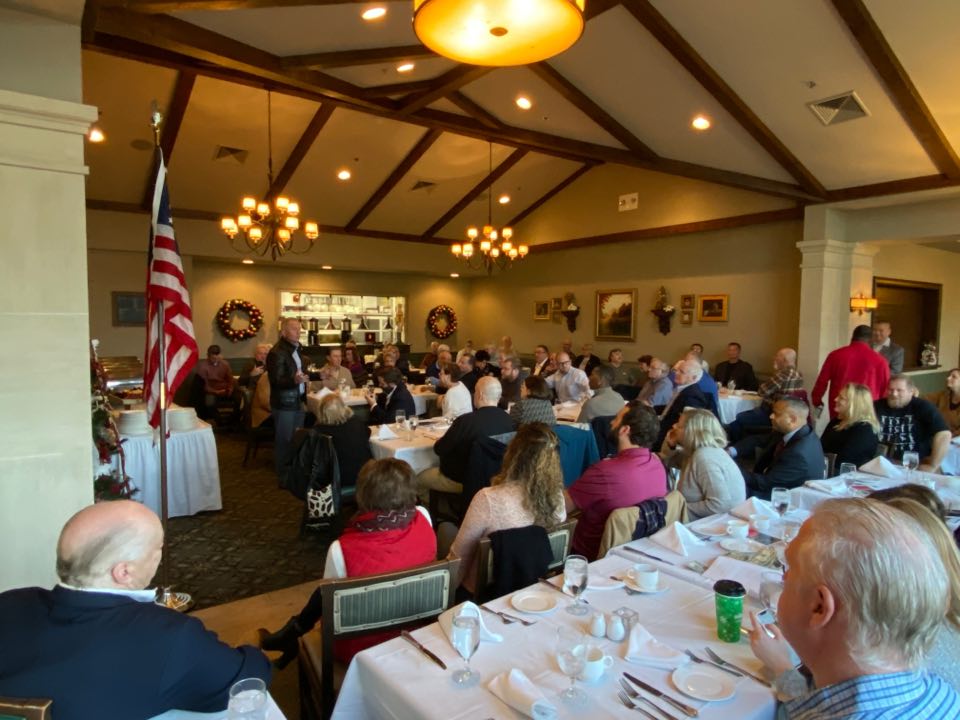 My first post-college volunteer experience was Asselta-Clark-Donohue vs. the Van Drew Team, Save Jerseyans.

If you told 2007 Matt that 2019 Matt would be standing at a GOP breakfast breaking bacon with Congressman Jeff Van Drew (R-2)? I’d have called you crazy. But here we are.

It seemed like most of South Jersey’s Republican leadership was on hand for Van Drew’s first big Republican roll-out on Saturday morning. The venue was the regular Cumberland GOP breakfast hosted by county chairman and state Senator Mike Testa (R-1) at the Eastlyn Golf Course in Vineland. I couldn’t resist taking the early morning drive down a foggy, frosty Route 55.

I arrived a little late; Van Drew was already engaged in addressing the 100-ish attendees who listened closely as the long-time Democrat – who had been the bane of their collective electoral existence as LD1’s Democrat state senator – explained why he had decided to switch teams to the GOP.

The overflow audience spilled over into the next adjoining dining room; it included a number of district mayors (notably Vineland’s Anthony Fanucci and Middle Township’s Tim Donohue), the entire LD1 legislative team, Cape May chairman Marcus Karavan, 2020 U.S. Senate hopefuls, a small army of GOP committee members, and even former state Senator Nick Asselta (see above) who spent several minutes at the back of the packed dining room chatting privately with Van Drew.

The Congressman touched on a few hot button issues including the border crisis, declaring “I don’t even know what open borders means” which drew a few snickers and laughs. He also related the details of a recent trip to San Francisco and the far-left outpost’s “feces on the sidewalk” problem. According to Van Drew, leaving the Democrat Party was a gradual decision clarified in the maelstrom of impeachment (something he’s said before in mainstream outlet interviews). It’s the “my party left me” Reagan trope.

“Not all Democrats are socialists, but the movement of the party is definitely trending in that direction,” Van Drew explained.

He got a standing ovation at the end of his remarks. He even quoted de Tocqueville which wasn’t a bad touch for the conservative history nerds in the audience myself included.

Apologies in advance for the volume (lots of background noise):

The overall sentiment in the room was accepting if not a bit surreal as Van Drew made his way around the crowded tables guided by his campaign manager Ron Filan, a long-time South Jersey GOP operative.

Some breakfast-goers told me over eggs that they’re intrigued by the switch and inclined to support him but want to hear more policy specifics.

A couple of attendees privately expressed their serious doubts to me about whether Van Drew’s conversion was genuine or whether letting “the fox inside the hen house” (one attendees’s words, not mine) was a good idea for the party. Those sharing negative views were in the minority at the buffet line, but keep in mind this was an insider crowd. We’ll soon see how many share their skepticism on the outside.

I’m personally keeping an open-mind. We want Democrats to #walkaway. He said the right stuff today at Eastlyn. Of course, as ever, Save Jersey abhors cheerleading and maintains a critical eye on all politicians, right and left, incumbent or not; NJ-02 will be no exception in the weeks and months to come. Stay tuned.