Tammy Murphy administered a freeholder’s oath of office. Can she even do that? 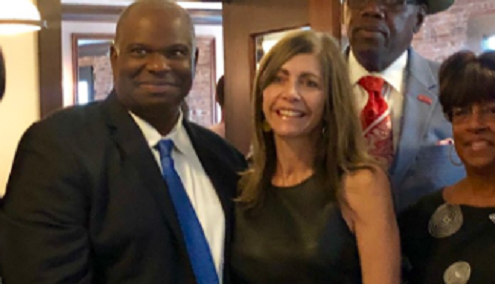 First Lady Tammy Murphy was in Atlantic County on Tuesday evening, Save Jerseyans, on hand to swear-in Democrat Freeholder Ernest Coursey after her husband got tied up with “storm preparation.” Okay. We all know over-brining for minor storms is Phil Murphy’s jam.

“First Lady” is, off course, a strictly honorary title. Her limited duties, responsibilities, obligations and privileges are all 100% a matter of custom and entirely ceremonial. First Ladies often get a secretary and develop a policy portfolio, it’s true, but she couldn’t spend $13,000 on a door without getting her hubby’s okay. The position is also conspicuously absent from the statutes (Title 41, Chapter 2 is where to look) establishing which public figures can administer oaths of office.

Her official state bio doesn’t say anything whatsoever about Mrs. Murphy being an attorney-at-law.

I don’t think she’s a notary public? Who knows. I’ve been surprised before.

She certainly isn’t lieutenant governor, a justice, or a judge, or a member of the state legislature.

She’s the First Lady. The Queen of England has 1,000-times more real power (because zero is the starting point here) than an American first lady (or first husband, lest I be accused of causal sexism by some of our liberal readers).

If anyone knows the answer? Feel free to hit me up: @MattRooneyNJ. I’m all ears. Legal or not, it’s the latest indication that our First Lady certainly considers the Murphy Administration to be a partnership.