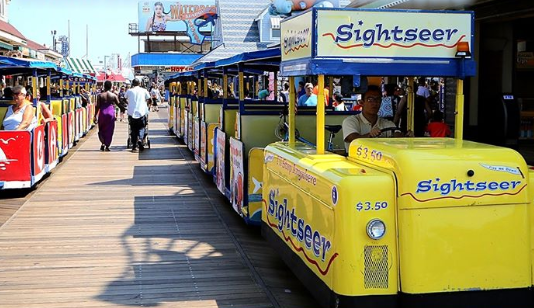 WILDWOOD, N.J. – The Wildwood Boardwalk’s legendary tram cars are a staple of summer at the Jersey Shore.

Tourists will be paying higher fares for the 2020 season, and it’s a direct result of a 2019 state minimum wage law.

The Wildwoods Boardwalk Special Improvement District, Management Corporation (WSID) announced on Wednesday that tram car fares would increase from $3.50 to $4.00.

“Like many small businesses along the Jersey Shore, the Tram Cars rely on a large number of foreign exchange students, senior citizens and young people to operate our business during an extraordinarily short and volatile season. For decades the State of New Jersey recognized the special conditions of seasonal, farm and amusement businesses and provided exemptions from certain wage and hour laws for those specific businesses,” the WSID announced on its Facebook page. “Unfortunately, other than extending the period of time until it reaches $15.00, the most recent increases to the minimum wage did not include any special exemptions for seasonal and amusement businesses.”

“Due to the dramatic increases in the minimum wage over the next several years, many small businesses along the Jersey Shore will be forced to make difficult decisions,” the organization added. “The Tram Cars are no exception and in order to continue to provide safe, reliable service to our visitors, while meeting the financial demands imposed by the new minimum wage, we have no choice at this time but to increase the Fare. We look forward to continuing to welcoming millions of visitors to the Wildwoods Boardwalk and to providing Tram Car service in the same manner that has been provided uninterrupted since 1949.”

The news of fare increased comes after the state minimum wage for most employers hit $11 on January 1st; the 2019 law signed by Governor Phil Murphy will keep the minimum wage rising on an annual schedule until it hits $15 at which point future automatic increases will be tied to the consumer price index.

According to a source with familiarity of the Boardwalk’s operations, the new law’s minimum wage increase will result in $250,000 more in annual salary and wages for the tram cars.

“In South Jersey, where the seasonal tourism industry is crucial to the local economy, the impact is likely to be more severe,” warned state Senator Mike Testa Jr. (R-1) whose legislative district includes Cape May County’s Jersey Shore communities. “These businesses were exempt from last year’s increase, but in 2020, they will be hit even harder to make up for it. To stay in business, many of these important local operations will have no choice but to cut staff, reduce benefits, and consider investing in job-killing automation. That is the reality.”