Did Bloomberg admit to having ‘bought’ Mikie Sherrill? Pretty much! 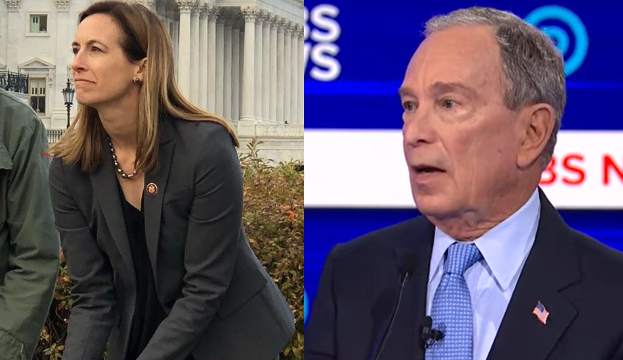 It was one of the night’s more interesting moments, and I’m not talking about Joe Biden’s “150 million” gun deaths gaffe.

Responding to a Biden boast about having campaigned for Democrat House candidate, ex-NYC Mayor Mike Bloomberg stopped not short, but halfway through admitting to having “bought” twenty members of Congress.

“Let’s just go on the record, they talk about 40 Democrats,” Bloomberg complained. “21 of those were people that I spent $100 million to help elect. All of the new Democrats that came in, put Nancy Pelosi in charge, and gave the Congress the ability to control this president, I bough—I got them.”

He didn’t get into specifics, but one of the Democrats Bloomberg helped big time in 2018 was candidate Mikie Sherrill (D, NJ-11). His super PAC spent over $2 million to help her win Rodney Frelinghuysen’s House seat; like a good little acquisition, now-freshman Congresswoman Sherrill recently reciprocated by endorsing Bloomberg for president. Bloomberg also gave to national Democrat groups which, invariably, also had an impact on the NJ-11 race.

His Independence USA PAC does get into specifics, listing Sherrill as one of his 2018 wins. Or purchases. Whatever.