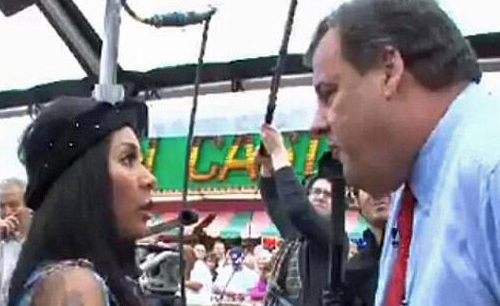 OCEAN COUNTY, NJ – Snooki a/k/a Nicole Polizzi used to be on MTV with “the Situation.” Now the former Jersey Shore star is “the issue” in this year’s ugly NJ-03 GOP primary, and she’s threatening to sue over the race’s most-discussed attack ad.

“I literally can’t.  So dramatic. I’m suing,” Polizzi complained via Twitter on Monday, referring to a David Richter campaign-produced attack ad which compares rival Kate Gibbs’s past run-ins with the law to images of Snooki’s infamous Seaside Heights behavior.

Snooki retweeted a Gibbs fundraising tweet back at the beginning of February.

The ad in question highlighted a series of missteps made by Gibbs including a shoplifting guilty plea at age 20 which led to the future freeholder getting banned from Kohl’s.

This isn’t the first time Snooki has entered into the New Jersey political discussion. Rutgers University raised eyebrows and tempers when, in 2011, it paid Snooki $32,000 for a public speaking engagement. Then, in 2013, there was a video-captured colorful run-in between Snooki and Governor Chris Christie on the Seaside Heights boardwalk.

Meanwhile, back in reality, Gibbs continues to get lock-step support from the Ocean County Republican establishment.

“We need a real conservative in Congress with a track record of getting things done. Kate Gibbs is a tax cutter, a job creator, and an emerging leader in our party who will help us fight Governor Murphy’s liberal policies here in New Jersey and support President Trump’s America First agenda in Washington,” the trio declared in a joint press release from the Gibbs campaign. “We endorse her 100% and will be voting for her at the Ocean County GOP Convention on March 4th.”