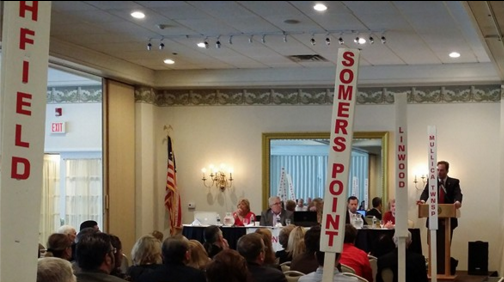 Nominating conventions are a familiar part of early spring in New Jersey. Not this year.

The Middlesex County GOP and Atlantic County GOP have both decided to cancel their nominating conventions due to the COVID-19 pandemic. Middlesex – where ordinarily any registered Republican can pay $10 to show up and vote – will host an online vote instead of meeting in person this Saturday. The Atlantic GOP decided to convene a gathering of municipal chairmen only.

Its a shame on multiple levels.

Both conventions are among the more “open” and therefore most entertaining in the Garden State at least on the Republican side of the aisle.

Both conventions were also potentially pivotal contests for the U.S. Senate primary where Indian Americans Rik Mehta (12 lines) and Hirsh Singh (2 lines, including Ocean) are battling for an early edge.

Down in NJ-02, Cumberland County’s Republican convention is indefinitely postponed; Chairman Mike Testa (also LD1’s state senator) is pushing the Murphy Administration to push back the March 30th petition deadline. Jeff Van Drew’s congressional nomination isn’t it doubt but, again, both Singh and Mehta hoped to compete there. Cumberland Republicans are also hoping to flip county freeholder board this year.

There’s no word yet if the Bergen County GOP convention is going forward on March 23rd in Hackensack, an event which can sometimes resemble a church parking lot carnival (minus the rides); that particular event may decide the frontrunner for the NJ-05 House primary between Mike Ghassali, Frank Pallotta, John McCann and a handful of other second-tier contenders.

What remains to be seen is what a June 2nd primary actually looks like IF coronavirus hasn’t abated. It’s anticipated that the state may need to expend millions to ramp up its already expanded vote-by-mail program. Most remain hopeful, of course, that this pandemic is a fading memory by Memorial Day. TBD.