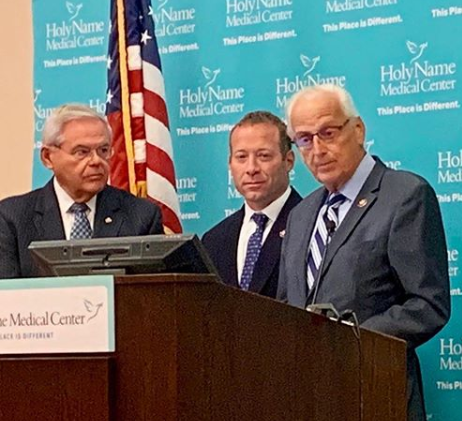 WASHINGTON, D.C. – Two of New Jersey’s senior Democrat congressmen took direct aim at hydroxychloroquine this week, the malaria drug touted by some medical practioners as a potential tool int he battle to save COVID-19 patientss.

On Wednesday, U.S. Senator Bob Menendez and Rep. Bill Pascrell penned a joint letter to the Food and Drug Administration (FDA) asking them to cease promoting hydroxychloroquine and a second drug: CYNK-001.

“While we understand the FDA is under immense pressure to quickly evaluate therapies for COVID-19, it is more important than ever that the FDA remain true to its standard processes in issuing EUAs. There is a chance that these two potential therapies could be more harmful than helpful,” the pair complained. “The FDA and the administration must also consider the damage done in the form of giving false hope to the American people. We represent a state on the frontlines of this pandemic. Statements promoting a therapy with no evidence, combined with the FDA’s issuance of an EUA outside of its standard process, may cause many Americans to believe that these experimental drugs are a cure-all, and worse over may inspire some to abandon social distancing and other proven preventative measures critical to controlling this virus.”

The American Left and its Media allies have savagly singled-out and attacked hydroxychloroquine ever since President Trump touted the drug as a potential game changer at a March COVID-19 White House briefing. The debate reached a fever pitch after the FDA authorized its emergency use.

Many physicians nevertheless have continued to prescribe the drug, and some frontline practioners and patients have reported success. The NIH recently iniaited clinical trials.

Others believe the backlash against the suddently-controversial drug is an overreaction at best and hyperpartisanship at worst.

“Hydroxychloroquine is a prescription drug, not a pill that Americans can buy in bulk at the local Walmart and hoard in their closest and pop prophylactically each day,” wrote David Harsanyi of the National Review on Wednesday. “Media keeps asserting that Trump is “ignoring the experts.” Well, the president didn’t induce South Korean doctors to use hydroxychloroquine. He didn’t induce Indian doctors to use it. I assume American doctors who are now “off-labeling” the drug to patients have some medical reasons behind their thinking.”